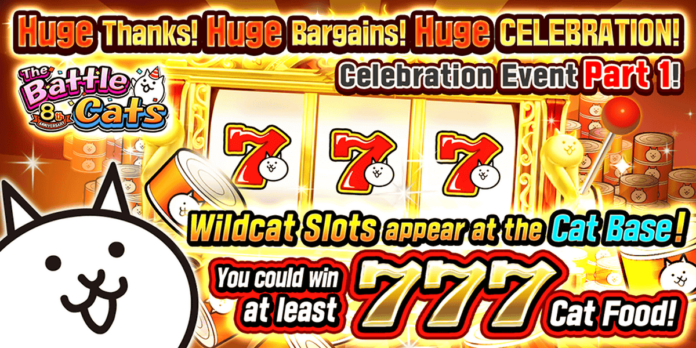 This article is sponsored by The Battle Cats

Yep, The Battle Cats turns 8 this month. To celebrate, developer PONOS Corporation is rolling out an 8th Anniversary event that will run from September 12th at 11am until October 10th at 10:59am.

That might sound like a long time for an event, but PONOS has packed an awful lot in, including the customary array of new gameplay features, giveaways, and deep discounts.

The first giveaway of note is a free spin on the Wildcat Slots. This could win you 777 Cat Food or more, which you’ll need if you want to take advantage of the short-lived Dynasty Fest feature.

Dynasty Fest is a limited edition set of Rare Capsules containing seasonal Uber Rare Cats. It ends on September 16th, so that should be your first port of call.

After that, you might want to finish off the final stage of Empire of Cats Chapter 1 in order to claim a Special Mission reward of a Platinum Ticket to trade for a Rare Capsule draw – it also guarantees you a Uber Rare Cat.

Then there are the Minced Meet-Up and Thank-You Sale stages, both exclusive to the global version. Clearing these will let you unlock Catburger in its third True Form.

The 8th Anniversary event is also a fantastic source of XP. You’ll get 30,000,000 XP just for taking part in the new Monthly Event All-Stars Grateful Gathering stage, while a selection of Heavenly Tower Cat Citadel stages will net you even more.

In addition to all that, the 8th Anniversary event boasts timed expedition areas, a new Super Present DX map, daily login bonuses, a new Arena of Honor ranking event, and a ton of heavily discounted items.

If we were to pick out just one of these, it would be the Special Cats that you can nab at a 50% discount in a series of sales between September 16th and October 9th.

You can download The Battle Cats for free right now on the Google Play Store and iOS – just click here.

The Battle Cats 8th Anniversary Event Is a Festival of New Content, Giveaways, and Bargains