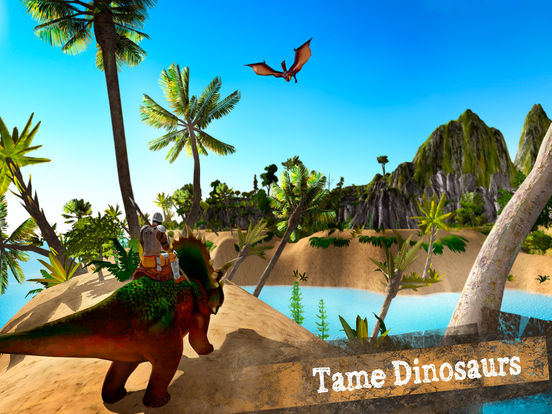 You’ve woken up on a mysterious island with no other humans in sight. The only other living beings on this island are… dinosaurs! The Ark of Craft: Dinosaurs is a survival adventure game with crafting and dinosaurs of course! Find a way to scrounge up some supplies and create shelter from the elements! You’ve also got the dinosaurs to worry about as well, but you just might be able to take advantage of them. We’ve got tips and tricks here in our The Ark of Craft: Dinosaurs cheats, tips and tricks strategy guide!

1. Keep an eye out for berries!

When you start a new game your main source of food will come from berry plants. Berries can come from either tall grass plants or thin trees. You can distinguish the tall grass plants because they usually have yellow sprouts, and thin trees are lying around in plain sight. If you walk up to one and notice your attack button turn into the gather button, then there are berries waiting for you! It’s important to gather as many berries as you can early on so that you have a nice buffer on your food supply.

So far, the various wildlife we’ve encountered on our journey at first look ferocious and deadly. That is until you actually try to fight them and realize they turn incredibly slow! Eventually on your travels you’re going to encounter some nasty beats, and while others are docile and will not attack until provoked, some will go after you the second they see you! The first animal you’ll encounter that does this will probably be a sabertooth tiger. Try to fight one and circle strafe it. You’ll quickly realize how slow the animals in this game turn, and as long as you stay away from directly in front of it, you’ll never be hurt. You can circle strafe and attack with whatever tool or weapon you have and you’ll be no worse for wear!

We recommend for your starting base to be somewhere close to mountains. Building by the beach is fine, but you’ll have a harder time with obtaining stone and iron. If you build by the mountains, you’ll find that those two materials are much more common plus you’ll still be by trees for wood and berries.

As you’re exploring through dense forests or areas with a lot of debris and foliage around, keep an eye to see if you come across something good!

The only way to earn the gold coins – the premium currency of the game – are through the quests. These quests are pretty simple but time consuming. They’ll ask you to do things like collect 200 wood, collect 50 iron, kill a mammoth, craft a helmet, and so forth. You’ll do most of them naturally as you play through the game, but if you’re in need to gold coins right away check them out and see which ones you can do immediately.

6. Take out all the animals!

Even if an animal isn’t hostile towards you, it’s in your best interest to take them out. Killing animals lets you take their meat which helps a lot with hunger. We recommend using the Stone Spear as a starting weapon, as it only requires sticks and stones. It does a nice 40 damage so it should take out early animals pretty easily. Don’t forget to circle strafe! Meat is useful in more ways than one!

Some animals when killed allow you to “tame” them. You’ll get a new animal of that same type but it’ll follow you and help you fight. You can even mount some of them to get around the island faster! Before you can do this, you’ll need a lot of meat.

For example, attempting to tame the sabertooth tiger requires around 24 meat. It’s very helpful in the long run to have an animal companion, so we recommend trying to do this as early as possible.

That’s all for The Ark of Craft: Dinosaurs. If you have any other adventuring tips or tricks to share, let us know in the comments below!