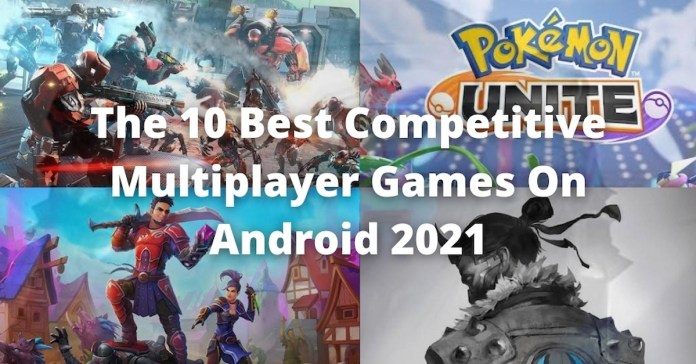 There are so many genre of games that often times it can be pretty hard to decide on which one to play. Do you enjoy playing games alone or you do enjoy competing with others players in competitive multiplayer battles?

If you answer is the latter, then this article is for you because we’ve listed some of the best competitive multiplayer games that you can and should play on Android in 2021.

This a multiplayer game from Nekki, creators of the highly acclaimed Shadow Fight 2 and Vector. After the release of Shadow Fight 3, Nekki received tons of negative feedbacks from players criticising the game’s lack of PvP multiplayer mode. To fix this, they released a brand new Shadow Fight game that primarily focuses on the multiplayer aspect.

The game has similar graphics and controls to Shadow Fight 3 and you can battle with real players in real time multiplayer matches. There are lots of skilled and experienced players in the Shadow Fight servers and you’ll have to be very good to compete in the Arena.

This is a multiplayer racing game where you take part in real-time races with other players from around the world. You can deploy tricks such as EMPs on your opponents and you can also make use of nitro to boost your vehicle’s speed and unlock new rewards by winning competitive races.

The game has a total of 24 original race tracks and they include both carmac and dirt surfaces, so you can race and drift as you want throughout the game. It’s a bright and colourful game with decent graphics and a competitive multiplayer feature.

This is horror battle royal game that can host as many as 16 players. In this game you play as a shooter against the evil characters as you must fight to escape. During this terrifying experience your main objective is to annihilate everyone.

To do that, you roam around and search the environment the best weapons and equipments that you can find and take out all other players. The game controls are impressive with amazing graphics but being a new game, it’s still a bit laggy and needs more optimization.

This is an action game that combines gameplay from battle royal and MOBA genres. The game starts out in a vast island that’s filled with weapons monsters that are surrounded by a deadly fog that closes in on the players.

Your primary objective in this game is to be the last man standing. Unlike other battle royal games, this time you’ll be up against 20 other opponents instead the typical 100. Due to this, the gameplay is relatively short and each match lasts for about 10 minutes. Ultimately, this game merges two popular genres to create a very entertaining game that you should try.

EA’s Battlefield: Mobile is currently in its beta testing stages and right now it looks like a standard FPS game and isn’t very good looking. The game’s map however, looks significantly large, which the Battlefield franchise is known for.

While the game is still a bit rough around its edges, it looks really promising so far as it offers not only a competitive multiplayer feature but console-like gameplay as well. The game has a lot of features that will allow it to stand out when compared to the likes of PUBG and Call of Duty: Mobile.

Most of you may have already heard of this game long before you came across this article. Pokémon Unite is an online multiplayer battle arena game that consists of matches with 2 teams and up to 5 players. Surprisingly, the MOBA genre seems to fit perfectly with the Pokémon franchise.

The game map is split into two halves where you have to score points for your team by defeating NPCs or wild Pokemons and moving to different control points. In order to win, you’ll have to earn more points than the opposing team in the alloted time.

Gravity Brawl is a 2D multiplayer shooter that takes place in a zero gravity environment. Since there’s no gravity available, shooting propels you around the environment as well. The game has an interesting concept and a unique gameplay.

There are lots of characters, nine different modes to choose from such as 1v1, free-for-all, turbine brawl, punch a lot and pinata fest. It’s a fun game and you can also play the game offline which allows you practice before taking on real players.

You can also challenge other players in real-time multiplayer matches from the game’s lobby. The game offers amazing graphics with stylish features such as hundreds of customizations and over 700 variety of weapons to use.

Rec Room is a virtual social game that allows you have an adventure across various mini games. It’s also a multiplayer online game that allows players to meet up with friends and explore that contain different experiences.

Within the game modes there’s many popular game genres such as Rec Royale, a battle royal with 4 to 16 players. It also has several official missions with various tasks that you can complete. Overall, Rec Room is a fantastic multiplayer game that you can enjoy with friends and it supports voice chat as well.

Ever since it launched in 2017, Konami’s Pro Evolution Soccer, now eFootball, has completely revitalised the sport genre in mobile gaming platforms. The game has seen massive improvements over the years with one of them being online multiplayer.