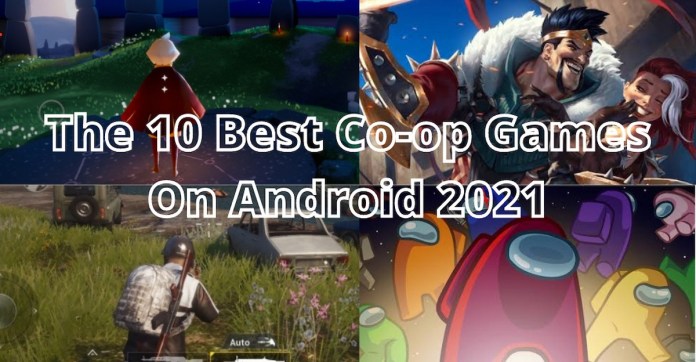 There is nothing quite like playing games in Co-op with your friends and family. You’ll all be playing together and aiming for a particular goal or trying to defeat a particular boss or bunch of enemies.

However, not all Co-op games require you to fight as our list consists of games that lets you team up with friends or just allows you relax in a heaven-like world and soar the skies with friends. So without wasting any more time, here are the 10 best Co-op Games you can play on Android in 2021.

We’re kicking off the list with Player Unknown’s Battlegrounds, one of the biggest co-op multiplayer games on mobile. In PUBG, players can add up their friends and chat them up via audio or text and set up multiplayer matches.

The game has five game modes that you can play either on your own or with friends as a squad. The voice chat is awesome when playing with friends as it’s a fine way to communicate when strategizing. PUBG’s co-op mode is simply one of the game’s best feature.

This game is the perfect party game to play with your friend. The game allows you join random sessions and play with strangers but you can also host your own private games or join a friend’s and that’s where the real fun begins.

And if you don’t have enough friends to start a session, you can simply host an online space and tap the private button to change it to public which allows other random players online to join your space. The game also features cross-play with PC and mobile devices.

Extreme Football is a 3v3 game that despite not being very popular, the game is still pretty interesting when you play with friends. It’s an amazing arcade street football game that lets you team up with two of your friends and enjoy some fast paced street soccer.

There’s tons of customizations available and flashy skills to show off in the pitch. There’s also voice chat and a local and global leaderboard. The game does have a lack of game modes which we believe will be updated with more modes in future to make it more exciting.

Thumbs up to Riot Games for the amazing work they did with LoR. It is simply one of the best and most addictive strategy card games on mobile. The developers took the game to the next level by launching the Experimental Lab.

LoR offers captivating game modes that are always changing and the Experimental Lab introduced the game’s Co-op mode where you and your partner can select a champion and work together towards the same goal rather than playing individual decks.

At its initial launch Mario Kart Tour did not have the co-op multiplayer feature but it was added in 2020 after many players requested the addition. Nintendo listened and did as requested. The multiplayer mode has a standard race which puts you up against other players.

And if you want to play with your friends or other nearby players, you can create a room from the Create Room mode. In this mode you make the rules, set your speed, choose your number of item slots and even split up your friends into two, three or four teams.

The Ghost is a new multiplayer horror game that lets you play with up to 5 friends as you try to survive and uncover the mystery behind a lurking evil that is tormenting you.

You’ll be playing as a survivor and trying to escape several horror houses. Another interesting feature is that you also get to play as a ghost and stop the survivors from escaping. If you want a scary horror game you can play with friends, then give this a try.

The has a lot of features and game modes that you can play including battle royal. That’s right, you can play battle royal with your friends in this game and the last player remaining wins the round. You can chat, party, explore and just have fun.

Genshin Impact is an open world adventure game that has a captivating co-op mode that allows you team up with random players or with friends and go up against bosses and complete missions. The 4-player co-op mode let’s you play with strangers but to create your own room and play with friends, you’d first have to complete a large chunk of the story.

You need a level 16 and above Adventure Rank and while it can take some time to get there, it’s absolutely worth it. Genshin Impact has a vast world with so many gorgeous locations to discover and explore. It’s fun to explore alone but doing it with friends, that’s an adventure you won’t forget.

Call of Duty: Mobile made its way to Android and iOS in 2019 as a First-person Shooter and despite the game’s early negative reviews, it performed better than most people thought it would. The game is arguably the best FPS game on the mobile platform.

You can team up in duos or quad and play one of the game’s online modes or battle royal with friends. The zombie co-op mode is also one of the best multiplayer modes you can play with friends and survive waves of zombies. The last team standing wins the game.

Sky is an exciting open world adventure game that takes place in a heaven-like realm. A place that was once inhabited by a great civilization that had fallen for unknown reasons. You’re taksd with discovering the mysteries in specific locations.

These tasks can be completed by joining forces with friends as co-op is one of the game’s main feature. You can soar the skies with other players and they can either help you solve mysteries or simply hang out with you. Sky is a fascinating and unique game where you explore a gorgeous world with like-minded gamers.