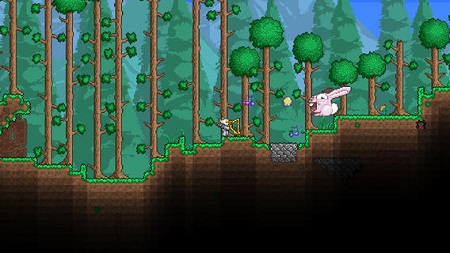 A new Easter update is now available for the highly successful Terraria, the sidescrolling game developed by 505 Games that’s been keeping gamers engaged since its released.

The timely Easter Update includes a new challenge that gamers will have to face during their time in Terraria: the terrible and menacing Easter Bunny Boss. The Boss isn’t available right after downloading and installing the update, but must first be summoned by defeating his minions, some really crazy bunnies that have invaded the world of Terraria.

The new boss battle may be though, but it’s definitely worth the effort. Once the huge rabbit has been defeated, the previously crazed bunnies will revert to normal, revealing their true generous nature. In fact, you will be receiving a special weapon or item, depending on your luck. Hunting bunnies is all well and good, but apparently it’s better to keep them happy to receive some really nice rewards.

Unfortunately it looks like this is the only addition included in the Easter Update. It’s still nice, though, as it will give you something new to do while in the game.

Terraria is now available for download in the App Store. The Easter Update is also available in all regional stores.