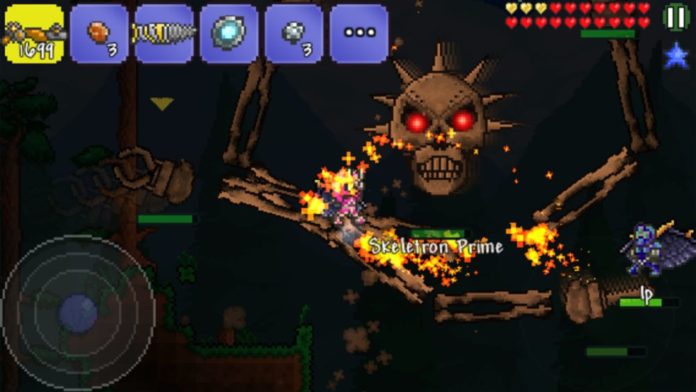 Terraria is a game that needs no introduction, as the platform/crafting game is now available on all major consoles as well as on iOS and Android. The mobile version, however, has been neglected for quite some time, and now lags behind the other releases, but a new big update is finally releasing soon.

On the game’s official forums, the developer has confirmed that the Terraria Mobile 1.3 update is now ready for alpha testing. All of the features and content have been implemented, and from now on, the team will focus on polishing and tweaking.

The developer also detailed some of the content coming to the game with the update.

In addition to the full-size lunar boss seen above, you will also probably note a handful of those ongoing tweaks/improvements that we mentioned. The Grapplestick is back in action, and we have made a lot of effort towards freeing up more gameplay space by lessening the clutter. In this screen, you can see that even with a full twenty buffs active and a PDA in inventory, there is plenty of visible space for the player to wage battle against this alien foe. Not only that, but you will also note that some of the PDA’s info items have been toggled off, and the player has the ability to hide the minimap as they see fit.

Terraria is now available on iOS and Android as well as on PC and consoles.

Terraria 1.3 for Mobile Is Ready For Alpha Testing, Developer Confirms