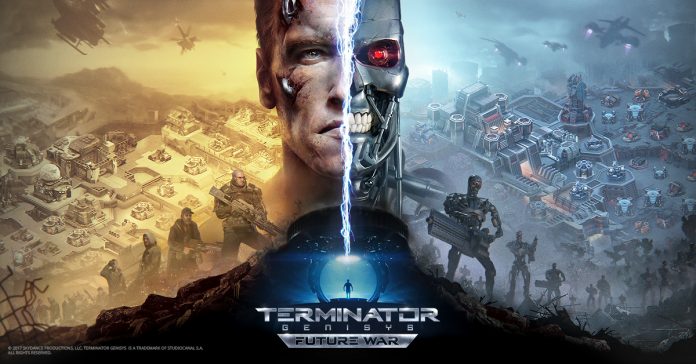 Take back the future in Terminator Genisys: Future War! With Genisys destroyed and Skynet offline, the war must finally come to an end. Engage in an epic war against machine and man – literally! Players will be able to choose their faction at the beginning of the game. Will you join the Resistance to end the war? Or will you join the remnants of Skynet and wipe out all of humanity? We’ll help you fight your battles with our Terminator Genisys: Future War cheats, tips and tricks strategy guide!

You know the drill! For the first couple hours of the game, you’ll be working on completing the quests. It’s important not to skip these as they’ll ensure that your base stays up to date, you’re outfitted with an abundance of resources, and your commander is leveled up adequately. You can tap on the button at the top left to check your next recommended quest. It’ll even take you directly to where you need to go to complete the quest!

3. Queue up the missions!

Missions are like quests but you don’t actually have to do much to complete them. Missions must be started, then you simply have to wait the specified time before they complete on their own. You have three different missions: personal, clan, and strategic. You have access to personal and strategic missions right off the bat, but as you can probably guess from the name you’ll need to be in a clan to access the clan missions. You can have one mission from each category in queue at a time, so make sure you have them queued up. You get a lot of experience and resources from them.

The beginning quests will have you build four boot camps, but unfortunately you can only have one of them training troops at once. Regardless it’s important to keep constantly training new troops. Most of the time you’ll be able to resolve conflicts in this game with just a massive amount of troops, so bolstering your numbers is always a good thing. If you see your boot camp queue empty, be sure to start up some training!

Once you’ve accumulated enough firepower, scan the wastelands around your base and look for Correctors. They’re giant invading robots, and you’ll need to take them down in incremental attacks. Once you finally do, you’ll be rewarded with valuable trophies that can provide you with a lot of boons. Before you can attack them you’ll need to wait for your attack charge to come back, which takes a while. Be sure to attack a corrector once you’re full on energy.

That’s all for Terminator Genisys: Future War. If you have any other tips or tricks to share, let us know in the comments below!