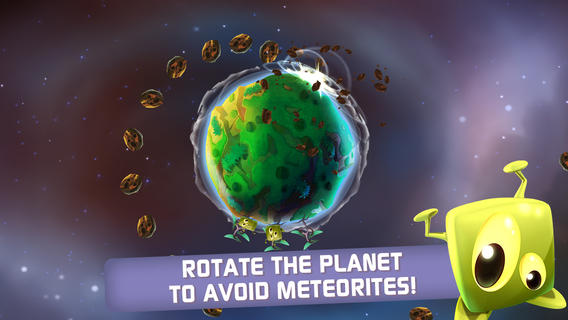 Team17 is a development team that needs no introduction. The team has created some of the more compelling videogames ever release and has been active since the 16-bit era.

The team famous for developing the Worms series, among others, has now released a brand new game on the App Store, a simple arcade game that comes with some really interesting twists that make the whole experience quite compelling.

We’re talking about (R)evolve, a game that’s all about protecting the life on a planet which is constantly threatened by wandering asteroids. How lucky!

During the course of the game you will have to rotate the planet as to save the plants and creatures from getting smashed by these meteors. (R)evolve is a game that doesn’t require a greater understanding of some complicated gameplay mechanics and that’s a good thing, especially for a mobile game.

(R)evolve starts easy but quickly becomes way more challenging, with a lot more meteors to avoid and more plants and creatures to save. There’s a good challenge level that will make you keep coming back to the game.

(R)evolve is now available for download on the App Store. The game is available for free so make sure to give it a spin if you fancy quick to pick up and play arcade games. You won’t be disappointed.