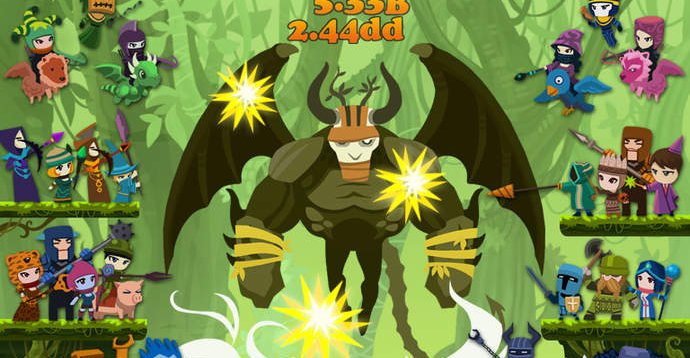 Tap Titans represents a fresh new approach on the tapping game genre on the iOS: this time, instead of swiping money away, you tap the screen to control your heroes and deal damage to all sorts of monsters, defeating stronger and stronger bosses along the way and improving all your skills. In other words, an extremely addictive game and we’re here to make it even more fun with some Tap Titans cheats and tips, a complete strategy guide that will help you progress a lot faster and destroy all bosses without trouble.

So if you got stuck or you simply want to improve your game a lot, check out our Tap Titans tips and cheats and you will get there to the top!

1. Tap Damage first
The first thing you should invest in for a looong time in your game is the Tap Damage (the first category represented by two swords). You want to increase this as much as possible and you can actually go all the way to stage 15 upgrading nothing more than the Tap Damage and ignoring everything else. This is your main damage early on and your winning streak!

2. Save money for extra tap damage
Save a lot of money before starting to invest in the tap damage, and when you start doing so, you will get after a few upgrades the option to invest a larger amount for an extra bonus. Always go for this route in order to max out your tap damage.

3. Start investing in companions when you have the money
I would suggest to start investing in companions when you have them money, after the 15th stage. Start with the more expensive ones because they are the most useful in terms of damage per second and upgrade all several times – they still won’ cause much damage and won’t be extremely useful at first, but it’s extra damage and it helps with a cheat I will share with you below.

4. Upgrade champions for extra skills and goodies
Even though their base damage might not be extremely useful early on, if you keep upgrading them, you will eventually get to a point where you will be able to unlock special skills for your champions, which increase the base damage of your hero or give various other bonuses. So in the end, when you start making real coins, it’s worth investing a few here too.

5. Use the special powers for boss battles
Get to the boss battle as fast as possible and leave it if you know you can’t win it normally. Return to it whenever any of the following happens:

This makes boss battles a lot easier and you shouldn’t waste your skills and fairy treasures on anything else!

6. The companions cheat
Once you get your companions unlocked and upgraded to a decent level, you can try out a cheat to make a ton of coins while you are not around to play: first go to your device’s settings menu and turn off the auto screen lock. Then plug your device in to make sure you don’t run out of battery juice and let Tap Titans run: your companions will eventually kill all monsters that will be spawned, except for the bosses, but after failing with the first boss, they will only get regular monsters anyway and you will get in return a ton of free coins. This is best used over the night, for example, when you don’t normally use the device.

These would be for now our Tap Titans cheats and tips. If you have other strategies that work, let us know by commenting below!