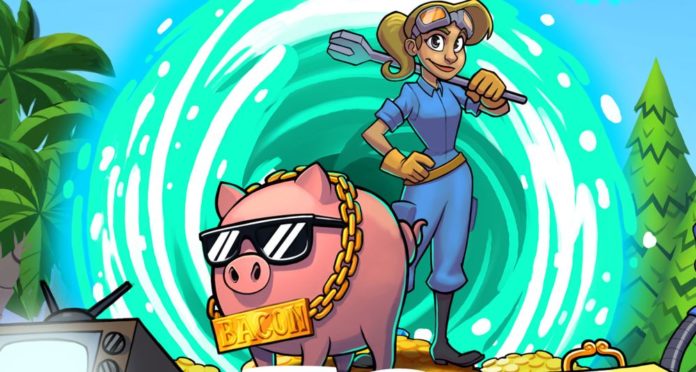 Tap Empire is a brand new idle game for mobile, coming from Flaregames. With an unique style and new features to enjoy, this is one of those games that fans of the genre must play. And we’re here to help you get the most out of it by sharing some Tap Empire cheats and tips in our complete strategy guide.

Tap Empire is quite an unique game, actually! Mixing a system that challenges you to complete stages (like in Candy Crush, for example) with endless stages scattered around the map, this is a game that will keep you busy and entertained more than your regular “one screen only” idle games. You’ll have multiple areas to work on, upgrade and master. Pretty awesome!

And now we’ll help you become even more awesome by sharing below a bunch of Tap Empire tips and cheats in our complete strategy guide! 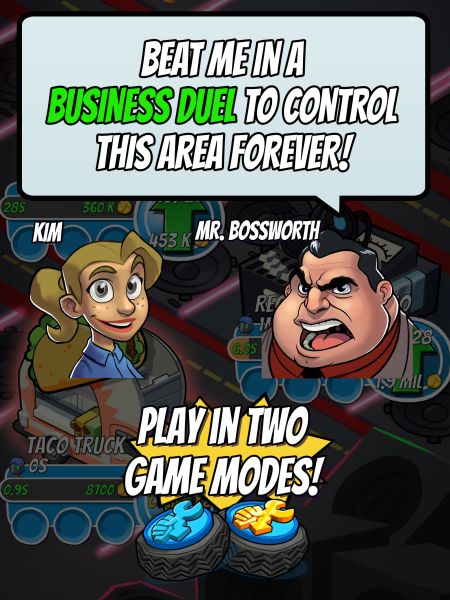 The innovation that Tap Empire brings is the existence of stages. You have to complete a stage in order to progress and unlock more businesses and more level ups for each area. In the end, you will have to “fight” a boss and complete a challenge in the given amount of time.

Once you do this, the real fun begins: that stage becomes the biggest challenge ever (or something like that), meaning that you will be able to spend a lot of time and resources to keep upgrading, in an almost-endless type of game.

This means that at any given time, you might have 2 or more stages that you will be allowed to work on: the completed boss stages where you have to pile up on the upgrades to unlock stars for new regions and the regular, easier stages that help you progress through the game.

So don’t forget this: it’s vital to work on ALL the stages that you have unlocked and purchase upgrades in each of them in order to unlock more content and double or triple the fun! 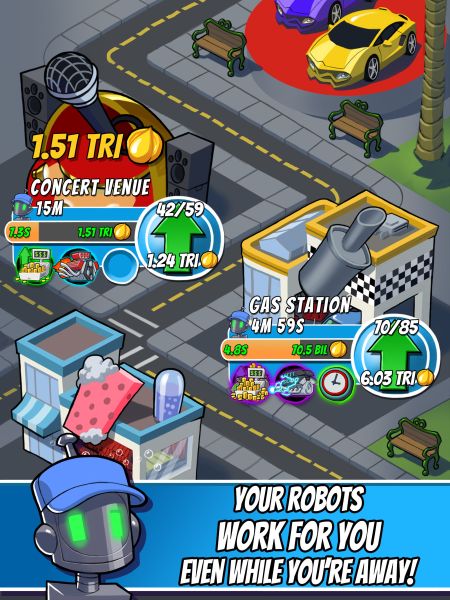 The robots are the most important part of the game, because they are those who handle automation of production in each given stage.

At first, they will only work for a limited amount of time and you will have to tap each business to restart production. But you will slowly unlock new upgrades that increase their working time first and eventually have them work non stop. It goes without saying that you should focus on getting those permanent upgrades as they make everything a lot easier in the game.

Note that you can also tap and reset the counter of the robots even before the timer itself reaches zero – make sure you always do that before leaving the game, in order to have your robots produce as much cash as possible.

Buy all upgrades in each region
Building up to the next stage, each region requires you to meet a specific number of business upgrades before being allowed to move on. But you can also purchase additional boosts before moving on – although that’s not mandatory.

However, it is highly recommended that you purchase each of these boosts (by tapping the top bar on your display) before progressing to a new stage, as they make everything a lot easier in the long run, increasing income, production speed and the amount of time the robots will work. 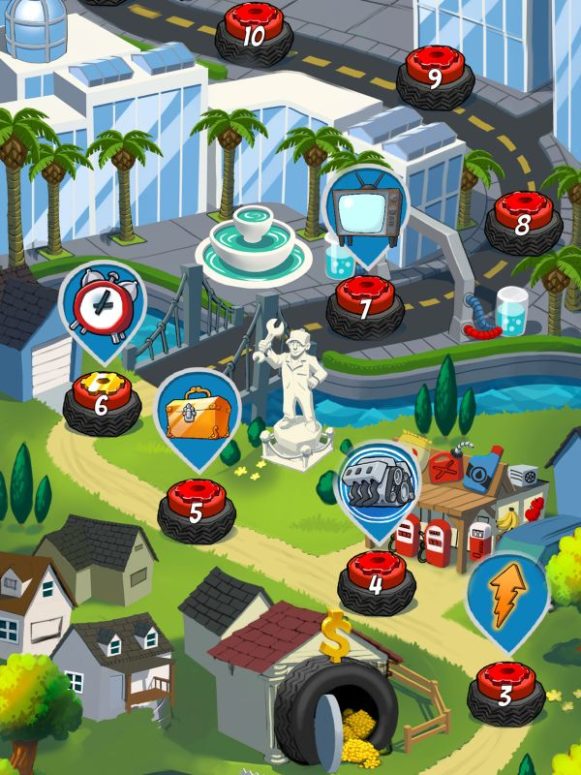 Use the boosts
As you play the game, you will be rewarded with various boosts that either increase the speed of production, the amount of money made by your businesses and, most importantly, time warps.

Time warps are unlocked on a per-area basis. This means that you have to complete the boss stage in each area in order to unlock the Time Warps and they are usually extremely expensive (but also extremely valuable as they fast forward the time by a given number of hours, giving you tons of income).

You will receive a limited number of boosts for free and they cost diamonds (premium currency) to unlock, but you also have the option to watch an ad and get a random boost. I really recommend you to do that – especially after unlocking the Time Warp as they are insanely helpful.

Upgrades in the Workshop
As you go up the stages, you will also unlock the Tech Workshop where you can work on additional upgrades for your businesses. This is a lengthy process that you should always keep running, as it will increase the speed of all businesses.

You should always work on unlocking the tech boosts for businesses that produce the most money (and are active in your current area), and then move on to the others, one at a time.

Get your free Gems every 7 hours
Every 7 hours, you can collect the Toolbox of Infinity from the main screen, which is basically a free goodie offered by the game’s developers. Make sure you collect that as often as possible, as you will usually get a lot of free diamonds from that box!

You also get the chance to double your income for an area that you were away from for a while – and you should take that offer after spending a few hours away from the game, as that’s when the boost is truly substantial.

This would be all that we have for you in terms of Tap Empire tips and tricks. We’ll update this guide as we go up the levels and unlock new features or find out new strategies worth sharing. And if you have some additional tips and tricks – or maybe cheats – to share, don’t hesitate to let us know by commenting below.