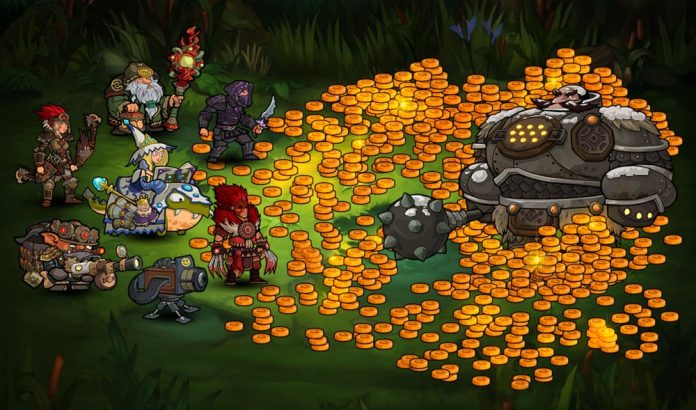 Tap Adventure – Idle Game has made its way to mobile after its global release and you have all the reasons in the world to play it. Fun and extremely challenging compared to your regular idle games, this one will keep you busy for a while especially since you’ll have to do a lot of tapping in order to progress and help your team go through the levels.

But we’re here to help you out with some Tap Adventure cheats and tips: a complete strategy guide explaining the game’s mechanics, heroes, Time Loop and much more. You’ll start playing like a Pro and that’s all that matters. So let’s not waste any time and let’s check out some Tap Adventure tips and tricks below!

1. Tap a lot
Unlike most idle games out there, Tap Adventure is pretty old school, meaning that you will have to do a lot of tapping and be an active part of the game – especially early on – in order to progress. Work on upgrading your Magic Damage early on and increase it as much as possible as it will help you defeat bosses and cruise through the stages faster. And, of course, tap the screen!

2. Watch the Ads
Sometimes, the flying monster that randomly appears in the game, will hold a very large treasure. In order to open it, you will have to watch a video ad. I recommend to do so because it offers a great reward for just 30 seconds of your time. Usually, that’ enough to upgrade your Heroes several times and makes progress a lot easier.

3. How to upgrade heroes?
The price for upgrading your heroes increases a lot very soon. There are some interesting mechanics, too: reaching milestones (level 25, 50 and so on) gives your Heroes huge bonuses to DPS numbers, after you can afford that particular upgrade. However, getting there doesn’t seem cost effective until you actually reach the upgrade.

For example, upgrading your first Hero to level 25 becomes extremely expensive and compared to the amount you’d have to pay for the second hero and DPS gains, it doesn’t seem to make sense. But as soon as you hit level 25 and evolve your first Hero, their DPS will drastically increase and be well above the one of the second so all the money you’ve spent makes sense now.

So in order to upgrade heroes, work on them constantly, but focus on reaching the milestones, from the first hero to the last (first is cheaper and each star gain will make them much better than the more advanced heroes). Also keep an eye on health bars and other skills that might pop up during your upgrades.

4. How to defeat bosses & hitting walls
Just like in all incremental games, some bosses will seem impossible to beat sometimes (and they are). That’s when you hit a wall and the only option you have is to go to the previous stage and grind a lot until you can upgrade your Heroes and Magic Damage more and take out the boss. That’s the only way to get over a wall and I recommend simply leaving the game for a couple of hours when you do so in order to gather a large amount of money for upgrades.

However, if the battle is tight, you might still have a chance to defeat that particular boss. In order to increase your chances, always go to battle with all your skills ready to use and ideally with your Heroes’ health at maximum in order to avoid losing them during the boss battle. Use your special skills and tap like crazy: this will help you easily defeat bosses!

5. How to use keys
You start with 7 keys by default and you get them back after a Time Loop. You need keys in order to open up chests that you receive from boss battles. These chests hold items or various goodies inside and it’s usually a good idea to open them as soon as you have the chance. Some players believe, though, that opening chests reaps better rewards if you do so in the later stages, but I’m not really sure about that. The only thing that’s clear to me is that the rarer the chest, the better the rewards. But try to micromanage your keys in such a way that you will always use them all to open chests before a Time Loop.

6. How does Time Loop work?
The Time Loop resets all your progress and basically has you start over. But when you do a Time Loop, you earn Runestones based on your progress and you spend those on buying artifacts which grant you special powers and bonuses, making progress through the game a lot faster.

I recommend going for the Time Loop at level 125 for the first time (as soon as you unlock the option), then go for it every time you hit a major wall and either upgrading your Heroes requires a lot of time and money, or the Boss really seems unbeatable. But the Golden Rule of Thumb here is to always Time Loop as late as possible in order to maximize gains.

This would be all for now for Tap Adventure, but we’ll make sure to update the article with more tips and tricks in the future. If you have some tricks up your sleeve, don’t hesitate to share them with us in the comment section below.