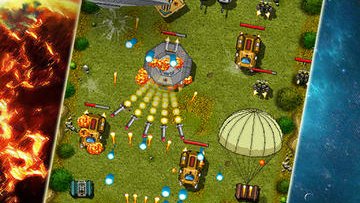 Armor up, soldier! The mysterious alien race known as the “Zionix” have invaded your world, and now it’s time to fight back! Don’t stop shooting and destroy everything in sight! Tanks vs Aliens is a classic top down shoot-em-up, and you’re going to need your wits about you if you expect to survive the alien onslaught. Never fear though, because like usual, we’re here with the ultimate Tanks vs Aliens cheats, tips & tricks strategy guide to help you drive the aliens out of your world.

Hop in your tanks and suit up because we’re about ready to go! We’re going to share with you some Tanks vs Aliens cheats, tips, and tricks so you can blast away like a pro.

Keep your finger moving to always stay on the move!

In somewhat of a design oversight, your tank will move exactly to where you tap and hold on the screen. This means that your finger will be obscuring a bit of your view, so bullets might slip by and damage your tank. What I do is constantly move my finger around so that my tanks is always on the move. This lessens the chance of getting hit by stray bullets and it also allows me to see better. You should also try to stay near the bottom of the screen, because the alien ships will usually come from the top of the screen or from the sides. Being near the bottom gives you more time to react to them.

Feeling under powered? Upgrade your current tank or buy a new one!

Be sure to spend your gold on tank upgrades! When you first start out, you are equipped with the weakest tank, the Angelfire. Personally, I wouldn’t bother upgrading anything besides steering power on it. Steering power increases your movement speed so it’s easier to scoop up those precious coins. The temporary ammo and rocket power ups you get during the levels are more than enough firepower, so skip firepower upgrades at least for the Angelfire. To recap, upgrade steering all the way and then save up for the next tank, the Ironfist. Also, I’m not sure if this was a fixed bonus or if it happens randomly, but after the 3rd level of Dark Forest I received a 50% off bonus for the Ironfist tank. It cut the price from 1,200 coins to 600, which is really nice! So I would hold off on buying new tanks to see if you can get more coupons on them. After you buy the Ironfist, you can upgrade whatever you please.

At the beginning of each level you’re given the option to buy one time use power ups. They are all very useful! The magnet is good if your tank is slow, and the doubler will really help you bring in the dough, so buy one if your tank is fully upgraded and ready to destroy everything in sight! If you’re having trouble with a difficult boss, the golden ammo powerup will definitely help too.

The airstrike is a devastating full screen attack that starts at the bottom of the screen and slowly makes it way up, bombing everything unlucky enough to be in the way. If the screen is starting to get cluttered with aliens, use the airstrike to create some breathing space. It just might save your life! Also it does tons of damage to bosses, so if you can, try to save it for them.

Don’t worry about 3 starring each level!

To get 3 stars on a level, you have to destroy almost every alien in the level, collect the coins, and take minimal damage. This is very difficult when you’re first starting out, so I wouldn’t worry too much about it. Play the game normally and come back to the earlier levels when you’ve got a souped up tank to make it much easier.

Be careful of that silly advertisement!

In another questionable design choice, there is an ad banner placed at the very bottom of the screen during gameplay. Unfortunately, your tank is also positioned near the bottom of the screen and I’ve tapped the advertisement a couple of times on complete accident. Here’s the cherry on top: the game will continue to run while the advertisement covers the whole screen. This has gotten me killed several times and it was very annoying. I figured out a little trick though; if you don’t let go of the screen to re-tap you should have no problems. Keep this in mind to avoid frustrating, unnecessary deaths!

That should cover everything about your tank. Got any suggestions or comments? Leave them below in the comment box! If not, get out there! These aliens aren’t going to blast themselves!