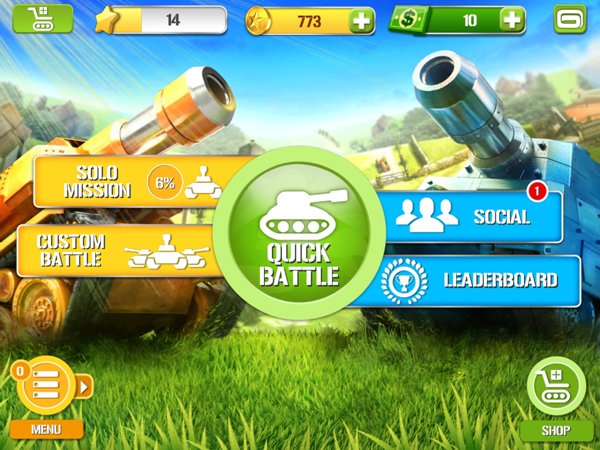 Tank Battles is among those iOS games that don’t really break new ground but still manage to be incredibly fun, thanks to a simple but engaging formula.

As you might guess from the name of the game, you will be controlling some small tanks during the game, competing against other players as well as collecting funds to upgrade your tanks and even buy some single use boosts that will give you an edge during the actual battle.

While the general rule is shooting everything that moves ( and doesn’t) in the game, there are a few tips that we will be sharing with you that will surely help you in the heat of battle. Master some of them and you will become truly unstoppable. Maybe not, but you’ll still have plenty of fun and that’s what matters the most.

Earning coins is the most basic and simple thing to do in the game. At the very beginning you may think that you can earn them only by defeating the enemies but that’s not entirely true, as you can get plenty of them by destroying the objects in each stage. Destroying the objects isn’t enough, as you will have to actually collect the coin and successful end the stage. If you are stuck in a harder stage, you can also go back to an older one and collect some more coins to upgrade your tank. Once you get more used to the game and its controls, you will be able to earn quite a lot of coins in a single stage.

While the game doesn’t really require any true strategy, as you will simply have to destroy other tanks to win, becoming a good player will need a bit more effort on your part. One of the most important things to learn in Battle Tanks is being able to shoot while moving effectively, as well as learning to use all possible covers during the battle. This proves to be even more important when battling against other players since the winner is the one that has been destroyed less. If you’re having a hard time learning to do so, you can simply practice in one of the early stages, as you don’t have deal with though enemies. Once you feel confident enough, you can try your strategy against player controlled tanks. Evading shots and answering them correctly is the one and only path to victory here: master it and no one will be able to stop you.

Tank Battles is now available on the App Store.