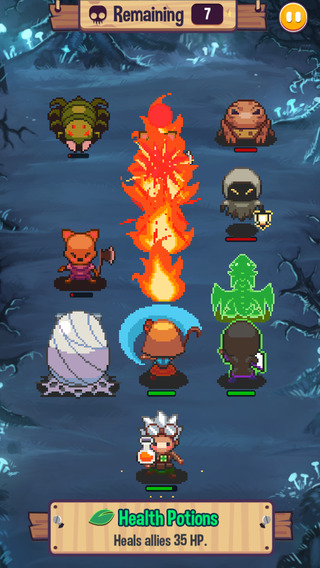 Swap Heroes 2, the simple yet engaging strategy game developed by Chris Savory, is now available for purchase and download on the App Store, as announced earlier this month.

Swap Heroes 2 comes with plenty of new features that improve the gameplay experience of its predecessor considerably. First of all, progression isn’t reset everytime the player dies, with the new quest system not only keeping track of  progress but also allowing players to unlock more characters, difficulties, play modes and more. Star points, which are also obtained by completing quests, can be used to equip upgrades as well as unlock a bossfight against the Shadow Knight. As if all these features weren’t enough, Swap Heroes 2 also includes eight new characters, 10 new locations, 20 new enemies and an endless mode, where players have the chance to earn a place on the game’s leaderboards. With so many new features, those playing Swap Heroes 2 will be busy for quite some time.

Swap Heroes 2 is now available for purchase on the App Store for only $2.99. The game expands the original game’s experience vastly so make sure to check it out if you have enjoyed the original Swap Heroes, you won’t be disappointed.