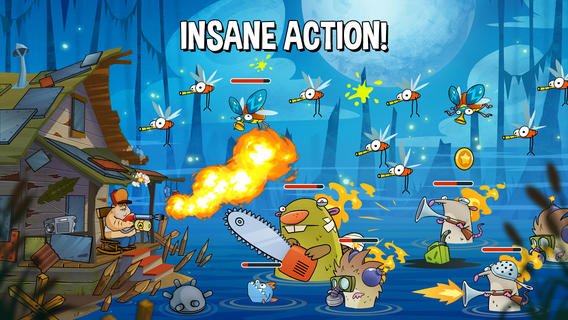 Swamp Attack is a brand new base defending game for the iPhone and iPad created by Out Fit 7, and it’s a really addictive game – something you probably know already if you tried to play it.

We are here to share with you a complete set of Swamp Attack cheats and tips – and we’re not talking about things that might get your account banned and should be used with caution.

We’re talking about common sense Swamp Attack tips and cheats that will help you get an advantage over the swamp monsters that keep attacking you and help you beat each level and each boss.

So if you want to do better in the game, here are our Swamp Attack cheats and tips!

Wait to unlock the weapons
There is no need to spend your coins on unlocking the weapons or explosives in the game. Instead wait to unlock them by completing levels – it’s the natural way to go and helps you get better weapons because the money you’d use on early unlock will be spent on upgrades

Try to get multikills
Since the shotgun is the basic weapon and it’s free, you should and will use it very often. You can get multikills with it by smartly shooting towards the middle of the pack of monsters. The idea is to tap somewhere in the air, not a monster and there are bigger chances for more of them to take damage. If you focus on one at a time, you’re dead!

Use explosives only when needed
The first couple of monster groups should be really easy to take out because you have more ammo and a fully loaded clip. Try to only use your valuable explosives only when it matters and put them to good use by making sure that you damage with them as many enemies as possible.

Upgrade, upgrade, upgrade
It’s a better idea to spend your coins on upgrading your weapons rather than purchasing explosives, because in the end it’s the weapons that help you the most with the monsters. Try to find the right balance between damage and clip size or ammo and never waste coins.

Prioritize monster killings
Raccoons are a good example here: since they explode when they reach your house or defenses, it’s a good idea to ignore the closest one if you can’t kill it in time and instead focus on the ones in the back.

2 dead Raccoons are better than 4 raccoons with 1% health, since they will all cause damage. Plan your moves ahead and destroy the animals based on the damage they might cause.

Replay completed levels
The last level that you had no trouble beating should be the level you replay a few times every now and then to get enough funds for a new upgrade, for filling up your explosives and goodies inventory and for remaining competitive.

Unless you want to spend real money on the game, that’s the only approach that works. It’s also good to try the quick missions since they can also reward you with some nice amounts of coins.

Use everything you’ve got in the Quick missions
And I am especially talking about the explosives and extras here, because you won’t see any of them when the mission is over. So make your life easier and use them all as soon as possible!

Don’t waste reloading time
One extremely important thing to consider when it comes to reloading (this is mostly for the shotgun), is to let your main character reload one bullet or you’re just wasting time. In other words, if you shoot before you completely reload one bullet, you will reset the timer and you’ll require the same long time to reload next time. So always keep an eye on the bullets you have and try to shoot as soon as the previous reload is done.

And these would be our tips and tricks for Swamp Attack for the iPhone and iPad. Do you have any other strategies that work? Let us know by commenting below!