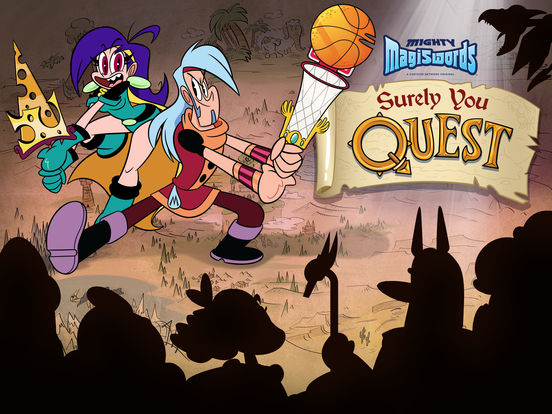 The hit Cartoon Network show “Mighty Magiswords” comes to mobile devices! Surely You Quest – Mighty Magiswords sees our heroes Vambre and Prohyas on a quest to prove they are the best adventures in all of Lyvsheria! Following an invitation from Princess Zange herself, the two warriors for hire set out on a quest to undo all the wrongdoings in the world. There will be lots of loot, slugburgers, jemms, and of course MAGISWORDS! We’ll help you on your quest with our Surely You Quest – Mighty Magiswords cheats, tips and tricks strategy guide!

1. Get each unique color of Magiswords!

There are a total of four colors we’ve seen so far; there are blue, purple, green, and orange magiswords. Make sure that Vambre and Prohyas aren’t using the same types. You’ll want one magisword of each color equipped in all four weapon slots. Unless you know for sure that a level isn’t going to have a specific color to fight against, you always need to follow this rule. Monsters take half damage from non-matching colors!

With that said, there are some circumstances where using an opposite color magisword might be beneficial. When you find duplicates of magiswords you already own, your original magisword will get a power boost. Sometimes you’ll also find super powerful magiswords for sale at Ralphio’s. Either way, you might find yourself with a magisword that is way stronger than the rest of your swords. If you have one, try using it out on enemies. Even if it’s doing half damage, it may be still doing more damage than your same-color magiswords.

You have the option of watching a short advertisment at Slugburgers. Doing so will net you a Grup Soup (full revive) and a Double Slugburger (100% health recover) for free. You can do this every four hours, and it’s an easy way to stock up on healing supplies. With careful management and play, you should never have to spend jemms on food. You can put those valuable jemms towards new magiswords instead!

This is really only viable if your magiswords are powerful enough, but it’s still a valid tactic regardless. Try not to have one hero active for too long, as they’ll take a beating. When a hero is in reserve, they’ll regenerate health over time albeit very slowly. Sometimes you’ll get a bunch of monsters that have the same color so you’ll be tempted to have the same hero beat them with their weakness, but they’ll take a lot of damage. If you can balance it, your hero’s health bars should never fall too low.

5. Watch the show for more magiswords!

You’re a fan of Mighty Magiswords aren’t you? If you tune into Cartoon Network and watch the show, there will be times where you’ll see the phone icon pop. This is your chance to score a new magisword! Activate the microphone through the game and get close to your TV. The new magisword you get will be the one the heroes are using in the show! Super cool huh?

Most of the magiswords’ special skills are just pure damage dealers. Some magiswords have a confusion skill where they don’t do damage upon activation, but instead inflict confusion on enemies. When an enemy is confused, they are essentially stunned. They won’t be able to act until the confusion wears off. This can be a real life saver sometimes, so if you manage to find a magisword with a confusion skill, hang onto it and upgrade it!

That’s all for Mighty Magiswords Surely You Quest! If you have any other questing tips or tricks to share, let us know in the comments below!