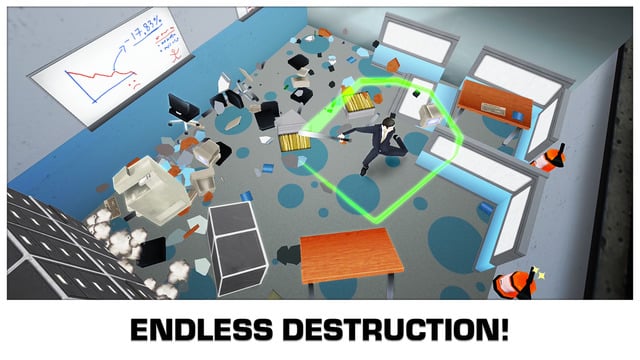 You ever have one of those days in the office where you just wanna smash all of the desks and equipment? Well now’s your chance to live out that dream! Without the repercussions, of course. Super Smash the Office is a simple yet fun game where you, well, smash the office! Just be careful – the wall of paperwork is advancing towards you so don’t waste any time! Let’s get to smashing with our Super Smash the Office cheats, tips and tricks strategy guide!

1. Aim for the fire extinguishers!

Before you can break down the wall leading to the next office, you need to destroy every single piece of furniture in the current office. Sometimes, you won’t have enough time to personally whack each individual item, so there’s sometimes a better way to do it! In some offices, there will be red fire extinguishers hanging on the wall. Hitting one of these with your bat will cause it to explode, instantly destroying all nearby items. Look for these when you enter a new office and make them explode as fast as you can!

2. Watch out for the guard robots!

The only active obstacle you really need to watch out for – well, besides the big wall of doom – are the guard robots. These guys come in different flavors: the red and blue ones will emit a red aura then charge towards you. Don’t let them get too close when they’re doing this, as they’ll knock you out! The grey ones will emit a read aura as well, but will not hurt you on contact. Instead, after a couple of seconds, they’ll self-destruct, so be sure to clear the area before they do! You can temporarily stop any of the robots by hitting them with your bat, but it’s very risky to do so because the collision detection in this game is a bit shaky. We recommend just keeping your distance!

Every couple of minutes, you’ll be able to open a free gift. There’s a bunch of coins waiting for you inside, usually around 50-100 coins. This is probably the only feasible way to earn coins, as picking up actual coins during the levels only gives you one coin, and they hardly spawn to begin with. Make sure to come back every now and then to collect your free gift!

Sometimes, instead of coins, you’ll receive upgrade tokens inside the free gifts. These can be spent on permanently upgrading the various power ups that drop during the game. Spend these as soon as you get them, as there is nothing else worthwhile to spend them on. You can increase the chance of power ups spawning, and you can also upgrade each individual power up, making them last longer.

That’s all for Super Smash the Office. If you have any other smashing tips or tricks to share, leave a comment below!