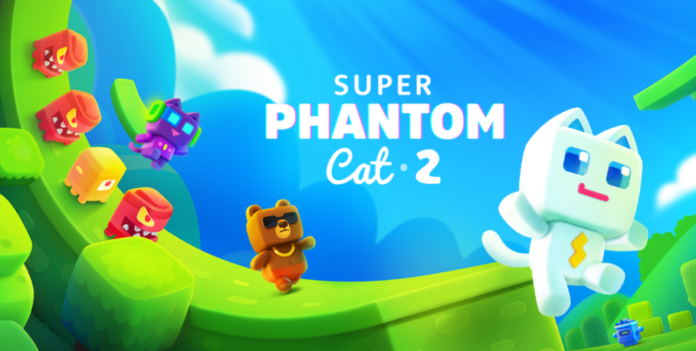 Super Phantom Cat 2 is a cute and charming platformer about a super cat named Ari. His sister, Ina, has been kidnapped and taken to the Phantom world, and now it’s your job to guide Ari through a colorful world. Our Super Phantom Cat 2 cheats and tips will help illuminate the way on this bright and courageous journey!

Take your time and explore!

There’s no time limit in Super Phantom Cat 2. You’re free to take as much time as you want to fully explore each level, and you’re encouraged to do so. Every time you stumble upon a secret area, you’ll earn exploration points. Each level has three main goals for you to achieve: collecting enough exploration points, collecting the star in the level, and opening enough chests.

As a general rule of thumb, if it looks suspicious or out of place check it out! Jump on it, run into it – whatever you can think of to trigger it. You’ll find secret rooms hidden behind walls, trigger special coins to appear, and so forth all the while collecting exploration points.

Get to level 4 as soon as possible!

Chests you’ll find in levels come in two flavors: wooden and golden. Wooden chests usually contain a few a coins, but golden ones have the real treasures like gems, character fragments, and more. The catch is that golden chests require a key to open, and while you start out with five you’ll quickly spend them all up.

Upon hitting level 4, you’ll unlock the Key Factory at your base. You can assign certain cats here just like other facilities to produce keys for you. Keys cost 300 coins to make, and you’ll have to wait 30 minutes before they’re finished. Try to have at least one on you before you enter a level – some levels only have golden chests in them and you’ll miss out on the chest medal if you don’t open at least one.

Use your powers often!

Eventually you’ll come across temporary power ups that Ari can use to manipulate the environment around him. Many secret rooms require clever use of these powers to find them, so when it doubt use your power! There’s no recharge time or usage limit to the powers, so don’t be afraid to use them wherever and whenever.

New heroes are acquired after you collect enough of their fragments. Some heroes need a lot, while others only need a couple. It’s important to note that certain heroes have a yellow diamond above their box in the hero selection screen – this denotes that they have special abilities. For example, Nono from the Adorables starts each level with an extra heart and has exclusive movement effects. These heroes require a lot of fragments to unlock, but they can help you out on certain levels, so make sure you pick the right hero for the job.

You know how sometimes the game will pop up these little messages encouraging you, directing you, and just generally leading the way? Some of these messages whimsical and lighthearted, but some of them are actually hints to what to do next. If you’re missing a chest, secret area, or star, sometimes these messages will lay out important clues for you. Be sure to read all of them so that you don’t miss anything!

That’s all for Super Phantom Cat 2! If you’ve got any other tips or tricks, let us know right meow in the comments below!