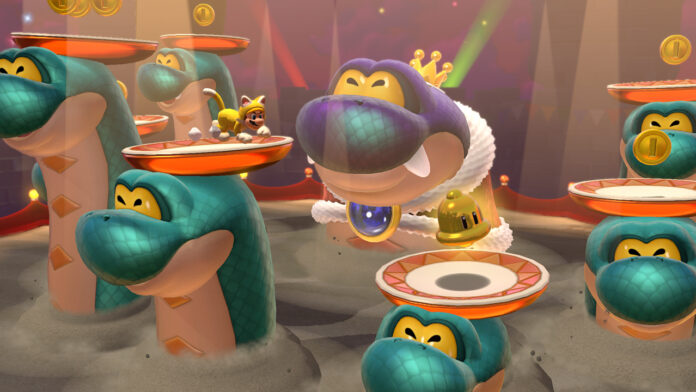 Super Mario 3D World + Bowser’s Fury wouldn’t be a proper Super Mario game without a selection of different power-ups, and the new entry in the series doesn’t disappoint in this regard. The game is among the 3D Mario games that features the most diverse power-ups, all coming with very unique uses that make the whole experience even more fun than expected.

So, what exactly do all these power-ups in Super Mario 3D World + Bowser’s Fury? Let us find out!

The Boomerang Flower allows your character to throw a boomerang to hit enemies from afar and even grab items.

The Double Cherry power-up creates up to five different clones of your character, allowing you to control all of them at the same time to fight multiple enemies and complete puzzles.

The classic Fire Flower power-up lets Mario and his friends throw fireballs to defeat enemies. The fireballs can also light torches if needed.

The Invincibility Leaf turns the character into a White Tanooki that cannot be defeated by enemies. If you’re good at the game, however, you will never see this power-up, as it only appears inside Assist Blocks which become available after you have died more than five times in any given level.

The Lucky Bell grants Mario and his friends cat-like abilities, allowing them to attack enemies with scratch attacks, unleash a powerful pouncing attack, turn into a Golden Statue to perform a ground pound from the air, and climb over walls.

The Mega Mushroom makes its comeback from the New Super Mario Bros. series, turning characters into giants who can smash through blocks, obstacles and enemies for a limited time.

The signature Super Mario 3D World + Bowser’s Fury power-up turns any character into a cat that can climb walls and attack enemies with a quick scratch attack.

The Super Leaf is another classic Super Mario power-up, granting characters a Tanooki tail that lets them attack enemies and float in the air after jumping.

A classic among classic, the Super Mushroom power-up lets any character grow in size to smash blocks and resist one enemy attack.

The Super Star power-up is yet another classic power-up, granting invincibility for a limited amount of time as well as faster running speed.