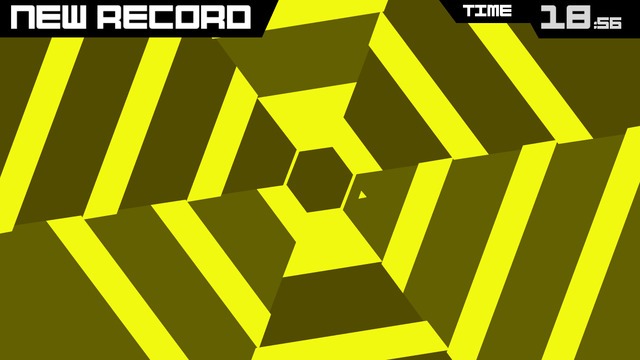 The arcade game Super Hexagon has been released a while back on the App Store and has managed to become successful among arcade games fans thanks to its simple to understand yet hard to master gameplay experience. Developer Terry Cavanagh hasn’t been resting on the laurels in the past few months and has worked hard to improve the game. Now we can finally check out how the developer has improved on his excellent game thanks to the new 2.0 update.

The new Super Hexagon 2.0 update fixes several issues that plagued the original version of the game, such as shuttering and lagging. The developer used a completely different engine for the new version of the game, allowing Super Hexagon to run at 60 frames per second on all devices. The new update also adds retina support, making it look quite a bit better on more modern devices.

What’s New in Version 2.0
Welcome to Super Hexagon 2.0! Super Hexagon is now powered by a whole new engine on iOS, which dramatically improves performance on all devices (60FPS), and finally brings long overdue retina support to the game!

Thank you so much for playing Super Hexagon. I hope you enjoy the update!

Super Hexagon is now available on the App Store. The new 2.0 update is also available for download right now.