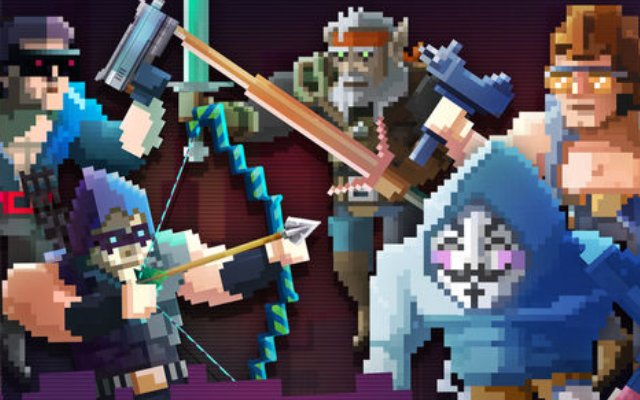 The ultimate fight club featuring ultimate heroes has just opened… and you’re next in line! Super Hero Fight Club is a simple to play but difficult to master physics action game. Each hero comes equipped with their own signature weapon, and you’ve got to fly them into victory! Our Super Hero Fight Club cheats and tips will show you the way of the hero!

Get a feel for the controls!

Once you get comfortable, try boosting forward. You can do this by holding down both turning buttons. This will make your hero straighten out and rocket forward! This technique is useful for pinning your opponent and going straight for the jugular! If you see a chance to use this boost, do it as it will almost guarantee you the match.

The big green button in the middle of the 1P and 2P button is the place where you can challenge the Daily Missions. These missions will give you a specific objective that has a certain modifier active. An example mission is one where you’ll need to survive for ten seconds while the speed up modifier is permanently active, meaning both you and the enemy will be moving faster than usual!

These missions are important because they’re the only way you earn the play button currency. The buttons are unique in the sense that they are this game’s premium currency, but you can’t actually buy them with real money.

You can only earn them, and they’re used for unlocking new heroes and arenas. Try to complete as many missions as you can, because they come in sets of three. After you complete one, you’ll need to wait until the next set rotates in.

Each set of heroes comes with their own unique weapons. Here’s a quick rundown of the weapons you can expect to see:

Use the arena to your advantage!

Arenas are randomly chosen when you jump into a match, and a good majority of them are riddled with hazards and obstacles. If your opponent is a bit too quick and you can’t lock them down, try using the arena to your advantage! Lure enemies into traps, obstacles, air vents, and more to throw them off.

That’s all for Super Hero Fight Club! If you have any other tips or tricks to share, let us know in the comments below!