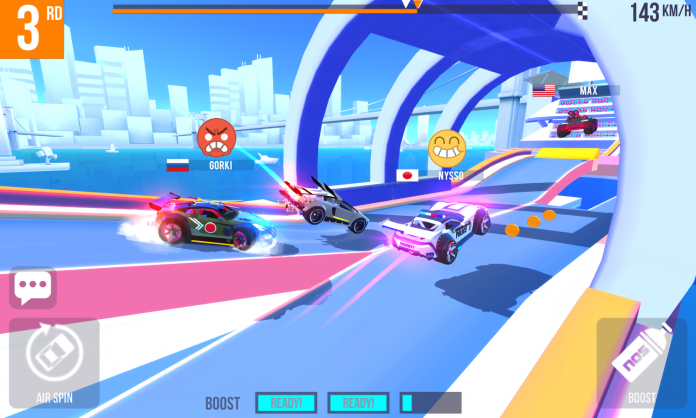 If you’re looking to master your racing finesse and nail down some fast times, our SUP Multiplayer Racing cheats, tips and tricks strategy guide will help hone your driving skills!

You have control over two things in SUP Racing – your lanes and your boosting. To get ahead in the race, you’ll need to master the in-depth mechanics. If you stay behind an enemy car, you’ll see blue streaks appear on the front of your car. Hold this position for just a second longer and you’ll begin to slipstream, indicated by a full-on blue shock wave in front of you. Slipstreaming increases your top speed, and in this state you can easily overtake whoever was in front of you.

If you’re feeling daring, you can even go for a takedown. To do this, start slipstreaming then switch lanes. Once you’re on their side, switch lanes again to smack right into them with the full force of the slipstream. You can also throw in a boost for good measure. With that much speed it should send them flying right off the track. If you wait until you reach a section of the track where there are no railings, it’s almost a guaranteed takedown!

Of course, there’s more to slipstreaming than just being able to pull ahead. You’ll need to avoid letting your opponent slipstream off of you as well. You can’t see that far behind you, but if you get a glimpse of someone, be sure to switch lanes. It’s good to save some boosts for when you’re ahead, because once you pull ahead of a car you’ll need to create as much distance between you and them as you can to avoid them slipstreaming.

Show some style for extra coins!

When you’re in the air, tapping the lane change button will make your car slightly rotate in the air. If you press this fast enough and pull off a full 360 with a good landing, you’ll perform an air trick. Be sure you get enough air and speed before you pull this off, as messing it up can really break the race for you! Air tricks don’t seem to have any kind of influence on your speed, but you do get a nice coin bonus at the end of a race.

When you’re traveling at high speed, switching lanes will make you drift a little bit. The total time you spend drifting during a race is totaled at the end and you’re given some bonus coins for doing so. It’s hard to recommend this technique as this drastically slows your overall speed down, and the coins aren’t that much. Only do this if you know for sure you’re going to win!

Watch out for the bumps and railing drops!

Each track has these yellow ramps that you can get some serious air off of. While they’re useful for pulling off air tricks, be sure that you watch your steering. If you change lanes while you’re still on these ramps, you’re going to fling yourself right off the track. This goes for any kind of bump in the track, actually – even the small bumps that are unmarked. As a general rule of thumb, stay on your lane when the track gets a little bumpy to avoid any kind of aerial mishaps.

You should be especially careful about this when you’re near openings in the track. Normally there are low railings to protect you from simply nudging yourself off the track, but with enough force you can get thrown off. This can happen with an ill-timed lane switch, a speedy opponent looking for a take down, or obstacles on the track. Keep your wits about you!

Compete in the events for stars!

When you complete a normal league match, you can open one of the five mystery items. To open more than one, you’ll need to accumulate stars. Stars are won by completing the current events. These events require you to place 1st most of the time, so you’ll need a couple of upgrades in your car before you can tackle them. With each star, you can open one more mystery box. Events are timed and rotate out once they expire, so be sure to complete them as soon as you can.

This game goes for the time-locked chests route. You can only have four chests at a time, so be sure to start any chests you have waiting. Some of them require hours to open, so you need to be on the ball about them. You get a chest every time you complete a full league circuit. Be careful if you already have four, as you’ll miss out on a chest.

Those are the tips we’ve got so far for SUP Multiplayer Racing. If you have any other racing tips or tricks to beat the competition, let us know in the comments below!