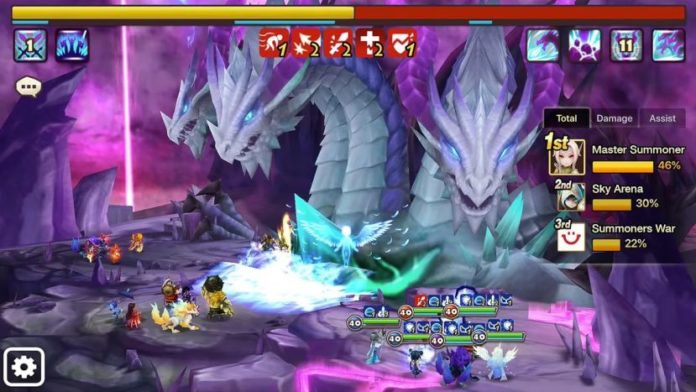 Summoners War is an amazing new game released on the iOS platform by Com2us, challenging us to master the art of monster summoning, evolving and fighting against other monsters in an RPG style that borrows some mechanics for collectible card games.

In other words, an epic game that you certainly enjoy, and one we’re going to talk about in our ultimate strategy guide, filled with Summoners War cheats and tips to help you get the most out of the game, both in the single player missions, as well as the arena.

So let’s not waste any time and let’s get this started with the first part of our Summoners War tips and strategy article!

1. Learn the powers of your monsters

Summoners War goes with a “Rock, paper, scissors” mechanic, meaning that one type of monster is strong against another, but weak against a third one.

If you don’t want to remember elements, remember the colors and look at the arrows above the heads of the enemies: green is good, yellow is decent, red is bad.

2. Take out enemies one at a time

Attacking all the enemies on the field is not a good strategy. Instead, focus on taking them one at a time: a monster than is killed and does no damage is better than three monsters with 1 health left.

Analyze the enemies and take them out one by one based on the monsters you have.

3. Use the special attacks ASAP

Usually, each monster has a special attack that needs a couple or a few turns to recharge.

In order to maximize the use of these attacks, start your battles using them, so that they fill up until you get to a new monster and you have time to actually use them more than once or twice per stage.

There is really no need to keep the one star monsters around since they are pretty useless, so instead use them to level up your three star or more monsters.

It’s true that they will level up naturally through battle, but sometimes you just need to give them an extra push, so go to the Power-up circle and power-up the monsters.

It’s a good idea to power-up those that you use most in battle, followed by new monsters that have to be powered up to catch up with the rest of the squad.

Friends are extremely useful in Sommoners War, so make sure you add as many as possible! You can find requests from people playing the game in the general chat section, or you can use Facebook to add more friends.

Then, you should rack up on the Social Points to use the Social Summon a lot. You’ll be getting not so great monsters, but at least you’ll get a ton of material to power-up and evolve your existing ones.

It’s the easiest and best way to do it, so add as many friends as possible as soon as possible!

Another great use for having friends is that you can take their leader monster into battle and get that extra monster power on your side.

And since you will only take to battle those friends whose monsters have the biggest level, make sure to level up and set as the leader your monster with the highest level and best stats. This goes hand in hand with tip #5.

It’s pretty difficult to complete all the daily missions, but try to and you will get a ton of great rewards. Check out the challenges and take them out one at a time. This is your source for free blue and red crystals and a lot of other goodies!

8. How to level up your monsters quicker

An easy way to level up your monsters is to replay levels that you have already completed, but take the friends’ monster with you.

This way, the total experience will be divided between less characters and therefore they will level up faster. Use this trick with all your friends’ monsters to quickly level up yours!

9. Play the Arena often & learn to choose your enemies

Playing in the Arena is something you should do as often as possible because there are great rewards waiting for you there, including tons of Crystals, based on the rank that you get.

Learn to choose the easiest enemies (the ones with the fewest swords numbers) and keep on attacking. This way you will keep getting points and experience for your monsters.

Plus, the higher your ranking at the end of the event, the better your rewards will be! Don’t forget to also check out the levels of the monsters you’ll be fighting against to know exactly if you can defeat the enemy!

10. Build all the Arena defenses available!

In order to increase your chances of successfully defending in the Arena, you should make sure that you buy all the defenses available based on your level. These little helpers can really turn the tides of a battle, and you want them all on your side!

Update note: Now here are some updated tips and tricks to make you a PRO in this game!

The boss battles can prove to be really challenging, so you should keep that super high level monster for it.

Even though you will have one lest monster to get experience, the added bonus is always welcome. After all, you want to complete a stage, right?

12. Have at least one healer with you

Healers don’t do much in terms of damage, but they are extremely useful to keep your other monsters alive. So a good strategy is to always have a healer in your team to increase your survival and winning chances!

13. Evolve your monsters one at a time

In order to evolve a monster, you have to take it to maximum level first. This means that you should focus on getting them evolved one at a time: monsters gain experience naturally as you play the game, but you should power up those you want to evolve in order to speed up the process.

After evolving a monster, move to the next one and let the one you have evolved level up naturally as you play. This is the best strategy when it comes to creating a perfect team!

14. Always look out for Awakening monsters

In order to awaken a monster, you need some special items: each monster has a different requirement, but they are all listed in the monster’s Awaken menu.

Generally, you get them at the Cairos Dungeon, so that is really one area you want to focus on. The good thing about Awakening is that it greatly improves your monsters and it has no level requirements – just get the items and you’re all set!

If you get stuck and are not able to beat a specific mission and you have no monsters to level up your team, then go back to completed stages and spend all your energy on them – you gain extra experience and slowly but surely, you will level up and become competitive once again.

It’s the only free way to do it – and if your team is strong enough, replay them on Hard or Hell difficulty levels!

16. Take advantage of the Magic Shop

That building is actually one that can really help you with your progress in the game! You can purchase all sorts of goodies from it, so make sure you always check it out and purchase every item that you consider useful.

This is really the way to go in Summoners War! After building the fusing center, you can fuse together identical monsters to level them up and give them new skills and improved stats.

This is a lengthy process, but one that has to be done in order to get the most our of your monsters!

These are two great cards that can be used to really boost your monster’s experience points.

You can either get them from the amazing Cairos Dungeon or purchase them from the Glory Shop (but you need to be really successful in the Arena for this!)

19. How to quickly level up in the game

If you have a lot of mana to trade, you can gain a ton of experience points very fast. Simply purchase decorations from the shop and then sell them.

The Large Rock is really useful since it gives you 100 XP points upon removal, and is right now the best deal when it comes to using this method.

As you play, you will earn a lot of runes. Try to equip them following the rule “best troop gets runes first” and power-up the runes that you use in order to boost their effects.

When powering up runes, try to keep things as even as possible and go in waves: upgrade all runes once, then all runes for the second time and so on because the costs increase with each upgrade.

So these would be for now our top 20 Summoners War cheats and tips to help you get the most out of the game. If you have other strategies that you use and which are working great, let us know by commenting below! 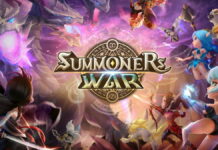