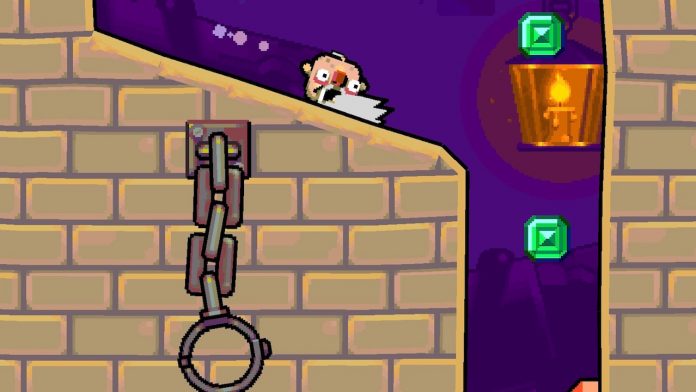 Nitrome is back with their latest game, Stretch Dungeon! Stretch Dungeon is packing everything you know and love about Nitrome – an easy to pick up control scheme, really nice pixel art, and simple and challenging gameplay. With absolutely no special powers to speak of, you’re going to have to manipulate the dungeon itself to make it out alive! We’re here to help you survive the dungeon with our Stretch Dungeon tips and tricks guide!

Freedom awaits, so let’s get right to it with our Stretch Dungeon cheats, tips and tricks strategy guide!

1. Save your gems for shortcuts!

There are exactly two things you can spend your gems on: continues and shortcut unlocks. The stretch dungeon is separated into different levels and once you reach the next level, you can opt to start your run from there. Before you can do that though, you need to pay a hefty amount of gems to unlock the shortcut. Just to give you an idea, it costs 200 gems to unlock the shortcut to level 2, so try not to spend your gems on continues if you can help it. Continuing once is okay since it only costs 15 gems, but it increases significantly every time afterwards.

In general, we’ve found that it’s usually better to just avoid the pots outright. Bumping into them will shatter them and sometimes they’ll contain gems, but sometimes they’ll have spike balls instead! Watch out! It’s probably not worth risking a run – especially if you’re kind of far – for a single gem. Also, sometimes you’ll be bumped in a fatal direction because of the pot collision. You’d think that the markings on the pots hinted at what they contained, but that’s not the case. We found some green pots that held spikes and red pots that held gems. Talk about confusing!

3. Watch out for the level-specific traps!

As you travel deeper and deeper into the dungeon, the game will begin introducing new gimmicks and traps to throw you off.

We had a couple of close calls with the beard, of all things! Be careful about your beard as it seems that it contains part of your “hitbox”. That is to say, if your beard collides with an obstacle, it might count as hit towards you and your run will be over! Your beard has its own physics, so you have to make sure it doesn’t flop around right into a spike.

That’s all for Stretch Dungeon. If you have any other tips or tricks to share, let us know in the comments below!