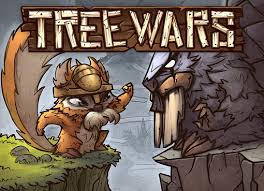 A really unique strategy game is going to be released tomorrow on the App Store. what makes this game really stand out from the competition is the unique setting, which will bring a smile on pretty much everyone who will come into contact with it.

Tree Wars is a strategy game developed by Funday Factory, which pits squirrels against beavers. While the premise seems really funny (because it is), the game takes itself very seriously, as its gameplay experience is as though as it gets.

In Tree Wars you will be commaning an army of squirrels as they try to push back an army of beavers. During each stage you will be creating new squirrel soldiers, archers and more in order to not only defend your castel but also destroy the beaver’s dams.

Tree Wars is not a strategy game that can be played defensively as the only way to create better units is to use the golden acorns which can only be found by defeating beavers. Considering that beavers will also create your same unit types, it becomes pretty clear how offense is the only way to do good in the game.

Not the deepest strategy experience available on the App Store but good enough to play for a few minutes. More than enough to smash some dams and show some beavers who’s boss.

Tree Wars will launch on the App Store tomorrow, January 23rd. The game will cost $2.99.