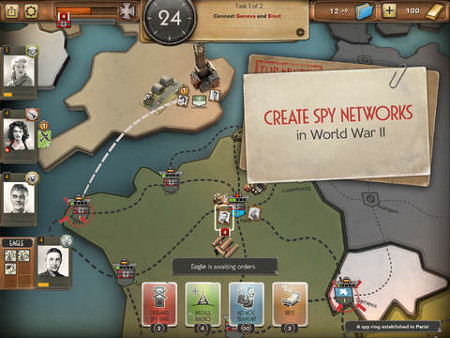 A new strategy game is now available on the App Store, a game where players will have to control special agents during World War II.

In Spymaster, developed by PlayRaven, you will be controlling some spies that have managed to infiltrate Nazi Germany. Needless to day, you will be using these spies to sabotage the nation’s war effort by finding intel, sneaking into importnat facilities and more.

Being a strategy game, you won’t actual control these spies in the game but only manage their efforts so that they don’t end up getting injured or even killed. Luckily, Spymaster includes some tutorial missions that will get players used to the gameplay experience, which can get complicated in later missions, as players will have to keep quite a few things under control. Being a spy is never easy, and Spymaster will make sure to show you that jeeping them under control is even harder.

Spymaster is now available for download on the App Store. The game, which is currently available for free, can only be played on iPad at the moment. Make sure to check it out if you’re a fan of strategy games, the game is definitely worth your time.