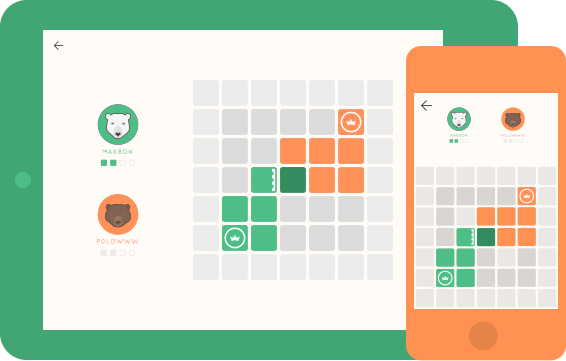 Kingdoms, the strategy game currently in development by French team Space Bears, was going to be released sometime during 2014. Unfortunately the game failed to show up on time.

The team has now confirmed that work is still undergoing on the game. Not only development is getting completed but some interesting new features are also getting added like a new single player mode, match replays and more. You can check out a replay right now by going here.

Kingdoms has been announced back this Summer. The game is a rather minimalistic strategy game where players will have to capture the opponent’s tiles while fortfying positions and conquer more territoy from the opponent. The game comes with some interesting mechanics that spice up the experience quite a bit, like the extra turn obtained by conquering a tile and more.

Kingdoms is shaping up to be a really interesting strategy game with some simple yet solid mechanics that allow for different playstyles. The game’s release date has yet to be confirmed but we will let you know when you will finally be able to conquer tiles and defeat kings on the go as soon as possible so stay tuned for all the latest news.