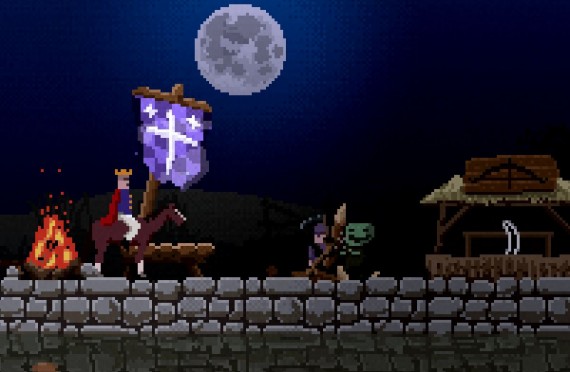 Another browser game is getting ready to make the move on iOS platforms. This game isn’t the first one to do so and it definitely won’t be the last, considering how iOS games are getting more and more popular.

Some gamers may already have played the interesting strategy game Kingdom, developed by Dutch developer Thomas van der Berg. The man behind the game describes it as a minimalist atmospheroc exploration / strategy game, a description that doesn’t give justice to the excellent game.

The game stars a King who has to deal with a strange situation, as he is haunted by ghouls at night which constantly try to steal his crown. And what better way to prevent this than by building a kingdom?

During the course of the game, players will have to collect coins while exploring and use them to create their own kingdom. Players will be able to build defenses as well as farm the lands and more. The whole experience is made more charming by the beautiful pixel art graphics which create a unique atmosphere.

The creator of the game considers the iOS version of the game as an expanded sequel, as the available locations and options will be vastly improved and expanded.

If you want to play the game on your iOS devices, there’s only one thing to do. Head over to the game’s official Kickstarter page and help the developer gather the funds needed to complete development. With 22 days to go and 31% of the total sum needed funded, there’s a good chance that the Kickstarter campaign will be successful. Still, this is no reason not to help such a talented developer so make sure to pledge some money if you’re interested in this nice title.