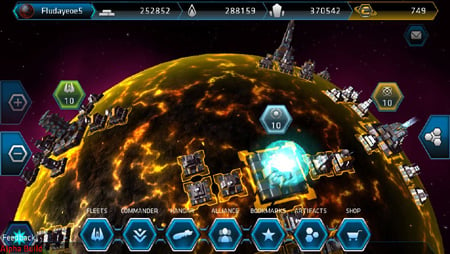 Free to play games are everywhere nowadays. Ever since the first games started popping out, almost every developer has tried to incorporate micro-transactions and other free to play features in different games.

Strategy games haven’t been to escape the “free to play” curse, with a few titles that have graced the App Store during this year.

A new strategic free to play game has been released on the App Store. For some mysterious reason the game is not available all over the world. Galaxy On Fire – Alliances, that’s the name of the game, is currently available only in Germany, Austria, Switzerland, Canada, Australia, New Zealand, Sweden, Norway, Finland, Denmark, Iceland, Belgium, Luxembourg, and the Netherlands.

Despite being a free to play game, Galaxy On Fire – Alliances isn’t an easy game that can be played casually as it features many gameplay mechanics that may need some time to sink in.

There are actually a lot of things that you will have to keep an eye on like colonization, base building, resource collection and more. Add the scale of the whole strategic features and you’ll understand how Galaxy on Fire – Alliances is a game that requires effort and dedication.

Being a free to play game, you will have to endure some wait times here and there. As always, you can shorten them by paying real money.

Galaxy On Fire – Alliances is now available the Canadian App Store, among other regional stores. We’ll keep you updated once the game becomes available all over the world.