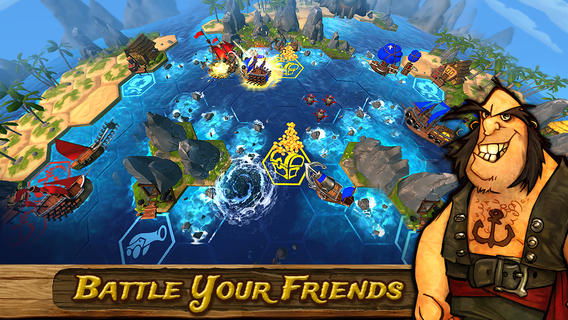 If you haven’t had enough of pirates, you may want to check out a new free to play strategy game called Age Of Booty: Tactics, created by the same team behind the Xbox Live Arcade success Age Of Booty.

This free to play game has everything gamers might want from a game like Age Of Booty; humour, strategy and challenges. Players will be tasked with building an impressive armada, choose captains and crew for your ships and more.

As in countless other free to play games, victory doesn’t just come with the satysfaction of having defeated an opponent. You will be earning resources which will be needed to upgrade your fleet and become an even more powerful force of the sea.

If confronting other player controlled fleets is your thing, Age Of Booty: Tactics has several multiplayer options. The first option will allow you to submit a turn and wait for your opponent to make your move or play with a local friends on a shared device.

Age Of Booty: Tactics will be available soon on the App Store in all regions. If you feel the sea calling you, it’s time to get on a boat and live the greatest adventure of all times.