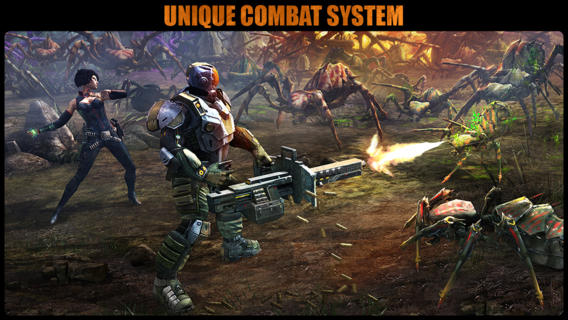 A brand new strategy game is now available on the App Store today. Better yet, the game is a free to play title, which will allow all gamers to try it out without having to invest some hard earned money in a title they barely know.

Evolution: Battle for Utopia is a really interesting mix between a real time strategy game and a role playing game. You’ll begin the game as a soldier who crash-lands on an alien planet. Needless to say, the planet is filed with hostile creatures who don’t really appreciate some total stranger visiting their planet. With the help of a robotic dog, you will have to explore this planet, deal with your enemies and get into contact with some of the other survivors.

The game’s battle system is quite simple. Once you engage the enemy, you will be witnessing the battle with a ground level view. Your party members will attack the enemies automatically and you will have the chance to earn some damage bonus with active reloads. In an automated battle system, item management is going to be crucial.

The role playing game elements come into play after gathering enough resources to purchase new items and build you own base. These resources can also be bought with real money through the IAPs of the game.

Evolution: Battle for Utopia is now available for download for free on the App Store.