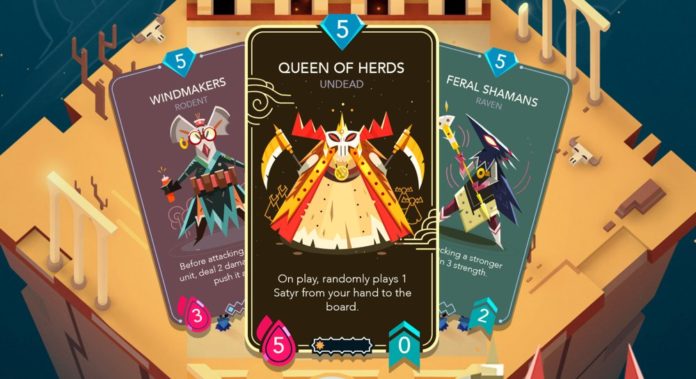 We want to make sure that your Stormbound experience is as close to perfection as possible, so we have a bunch of cheats and tips ready for you. Stormbound is a brand new card collecting game that has just been released by Kongregate on mobile platforms. It has some interesting mechanics, the one that I like the most being the troops that move forward each turn and winning ground for you to place new units on. Solid mechanics in a solid, great to play game.

Even though the game is currently plagued by connectivity issues and it seems to be offline more than it is online, we still managed to play for a fair amount of time and we’re here today to share with you some Stormbound cheats and tips so that you win all your battles and build amazing decks. It’s going to be extremely fun, so let’s not waste a single second and let’s jump straight into this!

Forts are extremely important
Fort cards and other buildings are extremely important – and the way you place them matters a lot! I made the mistake early on when learning the ropes to place a fort card one square before the extreme right, leaving a corner open. The enemy managed to push forward and I didn’t pay attention so I ended up not being able to deploy troops to defend my extreme right corner. The enemy troops there did some serious damage before I could right the wrongs.

This is why I consider that you should pay a lot of attention to forts and only place them in the middle of the lane or in the corners. Or at least have at least two squares to the sides (or troops already deployed) in order to defend those dead spots. Otherwise, the enemies will take advantage of these mistakes and things won’t look good in the long run.

Throw cards away
Extremely useful early on when you don’t have a lot of mana, you should always have in mind that you can swipe one card to the left and have it replaced by another. Always do that if you don’t have great cards to play as it could open up the door to great opportunities.

Go through the campaign first
I know that the most thrills when playing Stormbound or any similar game come from playing against human opponents, but you should delay that and instead focus on playing the campaigns. You will use them as testing grounds for your strategies and you will also get the chance to collect some new cards easily to improve your current deck. Because PvP battles are no longer fun if you keep losing them!

It’s all about the ranks
Go quickly through the campaign and win some battles online, though. Every two weeks a new season begins and the higher you are ranked, the better rewards you’re getting. Try to be as active as possible in any two weeks period in order to reap on the benefits. This is a game that rewards those who play often and play a solid game, so make sure that you’re part of the group.

How to win your battles
Despite all the recommendations above, what really matters is how you perform on the battlefield. There are multiple strategies that you can use and all are based on your understanding of the game, knowledge of your cards – especially their strengths and weaknesses and the ability to counter the moves your opponent makes.

The strategy I use with great results so far is this: I try to send as many troops as possible on the battlefield, focusing them on a specific area. In other words, instead of sending a troop to the extreme left and one to the extreme right, I send two troops close to each other. This creates an entry point for your troops and makes your enemy focus their attention there.

Gain the advantage by advancing as much as possible and keep the attention on that area by spamming troops there – then release a strong one to the other side, ideally when they’ll get right in front of the castle. This forces them to defend in most cases, leaving your initial area open for attack. From this moment on, it’s an easy ride to victory.

Use your spells at the right time and never rush with them because spells can really change the course of the game. And never place your forts too early in the game (unless they are really needed) – forts and troops that don’t advance, winning ground for you, are useless especially in the early game.

These would be our tips and tricks for playing Stormbound. If you have other strategies that work or suggestions for fellow players, don’t hesitate to share them in the comment section below.