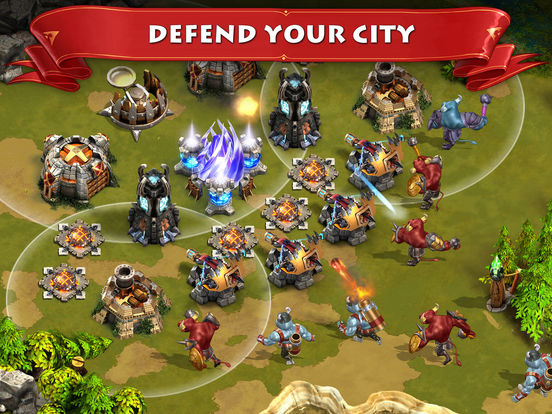 Storm of Wars: Sacred Homeland is an all new real-time strategy game mixed in with kingdom building. Build up an empire using resources from across the land, reinforce it with defenses to protect it from would-be invaders, and take the world by storm as the ultimate leader! Our Storm of Wars: Sacred Homeland cheats and tips will help you get a headstart on your kingdom journey.

You’ll need to carefully balance your kingdom’s army, resources, and power as you progress through the game, and we’ve got some tips to help you do just that in our Storm of Wars: Sacred Homeland cheats, tips and tricks strategy guide!

If you’re starting the game for the first time, you should collect your New Player Package right away. Look at the top part of the screen and you should see your gem count. Gems are the premium currency of the game, by the way.

Anyways, you should see a bouncing package where the gem icon normally is – tap it and you’ll be able to redeem your New Player Package. The NPP contains a bunch of speed up boosts, itemized minerals, crystals, and gold, special boosts, and more! The NPP gives you a nice head start so don’t miss it!

Occupy resource nodes on the map!

You can find natural resource nodes on the world map. Create an army and have them occupy the spot and they’ll begin to harvest the resource over time. The bigger the army the more resources they’ll be able to carry back to your base.

You don’t have to worry about doing this early on but once you start hitting resource bottlenecks, it’s time to venture out into the world and grab those resource nodes! You’ll need to check in from time to time to manually load the resource onto your troops. Once they’re carrying enough, they’ll automatically head back to base.

Early on you’re going to be juggling resources to invest into your units and your building upgrades. Summoning new units is actually pretty costly as it costs ALL three resources – mithril, crystal, and gold. And they’re not cheap, either. Try to balance your building upgrades between a sizable army. Specifically, you should try to upgrade your storage and generator buildings to ensure good income.

After that, you can start focusing on summoning new units. Jumping off of tip #2, a bigger army means bigger returns when you go out and capture resource nodes on the world map. You’ll also be able to fight battles better and defend yourself as well!

One very important building you should get as soon as possible is the Hospital. The Hospital, as you can probably guess, allows you to heal wounded units and cut down on summoning costs tremendously.

However, you’ll need to upgrade your City Castle to level 5 before you’re able to build it. We recommend prioritizing this, so you’ll need to rush the City Castle upgrades quickly. Use the item boosters you get from the New Player Package to accomplish this quicker, and be sure take over resource nodes.

Keep researching in the Academy!

The Academy is where you can research improvements to your buildings, units, and other factors of your city. As you progress down the research tree, you’ll also unlock new units and the like. It’s very important to keep researching, as the typical research project takes a couple of hours to complete. If you’re going to be away from the game for a while, be sure to start up a research so that by the time you come back to check in, it’ll be done or at least half way through.

That’s all for Storm of Wars: Sacred Homeland. If you’ve got any other tips or tricks to share, let us know in the comments below!