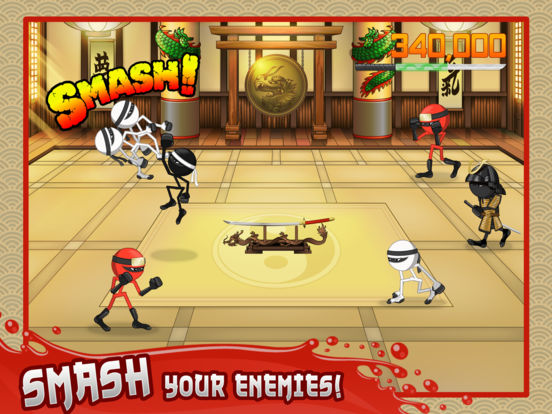 Stickninja Smash is a challenging fast paced game so mastery of it comes with practice. Lots and lots of practice! So let’s get started with our Stickninja Smash strategy guide.

1. Knock down your enemies!

Knock down all of your enemies before you start combos on them. We know it’s tempting to finish a combo on a single enemy, but that entire time you’re doing so more enemies are approaching! Practice getting into the rhythm of first knocking down all on-screen enemies then alternating between them to finish your combo. Your combo will resume from the last hit you left on the enemy, so as long as you’re fast enough you can finish your combo on all enemies. Just don’t take too long otherwise normal enemies will fade out after the first hit!

2. You can save the sword for emergencies!

You don’t have to use the sword right away once it’s fully charged. In fact, sometimes it’s better to leave it there if you’re far into a run. You will be constantly swarmed at that point so having a back up plan might save the whole run for you. All on-screen enemies are immediately knocked down upon picking up the charged sword, so this leads to an easy follow up where you wipe the whole screen clear!

At the end of a run you are given the option to watch an advertisement to double your coins. If you want to unlock the weapons, we highly recommend you do so. All of the weapons cost 1,000 coins to unlock. Considering that a typical A-rank run usually nets you somewhere around 50 or so coins, that’s going to be around twenty near perfect runs for just one weapon! You can see that this will get tedious very quickly. The good thing is that watching the end game advertisements will not only double your coinage for the run you just completed, but it will also count towards your next run.

4. Watch out for the strong enemies!

You now know that knocking down your enemies first is the best way to handle large groups. You do however need to keep an eye on the stronger enemies. These enemies (you can distinguish them by their different colors) aren’t knocked down in one hit, unlike the weaker counterparts. This means that you’ll need to spend another split second on them to knock them down, and while it doesn’t seem like much, a split second could mean the difference between life and death when you’re far into a run. Knocking down these guys should be your highest priority when they start showing up!

That’s all for Stickninja Smash. If you’ve got any other smashing tips or tricks to share, let us know in the comments below!