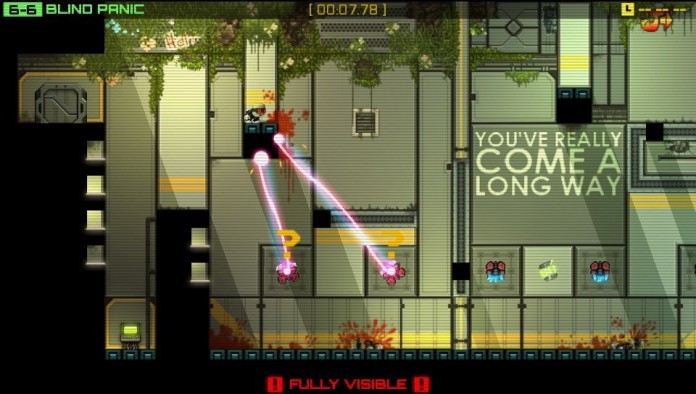 Stealth Inc., the nice platform game developed by Curve Studios, is now available for a reduced price on the App Store.

The game is now available for purchase for only $0.99, which is a really nice price, considering the overall quality of the game. Consider getting the game if you’re looking for a quality game to play on your iOS devices on the go.

Stealth Inc. is a game that manages to be a surprise at every turn with some clever level design. Getting discovered is not the end of the game since some of the alarms will not be triggering any trap while others will add so much stuff to the stage that the only choice left to players will be to start from the beginning of the level.

The game’s formula is really perfect to play on the go, with stages that don’t require much time to be completed. Unfortunately some of the final stages of the game are incredibly difficult in the original PsVita version: some players may get put off by this difficulty spike. Despite this small issue, the game’s a really enjoyable experience, one that you should not pass over if you like platform games.

Stealth Inc. is now available for purchase on the App Store. Make sure to take advantage of the weekend promotion if you are interested in the game. You can also read our own review of the game by going here.