NetEase has just announced their newest mobile shooter, Disorder. The game is centered around the warfare theme, where the gaming experience feels real and immersive, featuring everything that a player might need to get transported into the character’s shoes.

The game will feature vibrant and expressive characters, each following their own story and having a unique background, which helped developed their persona. This helps make the game feel more real and intriguing, as the player can choose which of the characters they could (or would like to) relate to more, as to represent them.

The player will then team up with four other players to form a five man squad and take on enemies (or rather enemy players), to reach the end-game objective. All choices are important, and aim is the most important of them all.

While nuclear weapons and heavy artillery also play an important role in the game, strategic thinking and keeping cool are also key to winning the battles, as the choices you make are all going to be part of the bigger picture!

This might include some more in game features that have not been revealed yet, but all that we can do right now is wait and see!

I would also have to mention that judging by the looks of it, the game seems to have some top-notch graphics and various locations which players can explore, all of which are rendered pretty realistically to further enhance the player’s experience.

Disorder is available for pre-registration now on their official website, so if you want to stay up to date with the game, go right ahead and pre-register to be among the first ones to learn when something new launches! 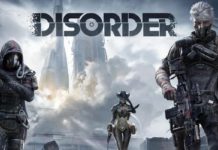