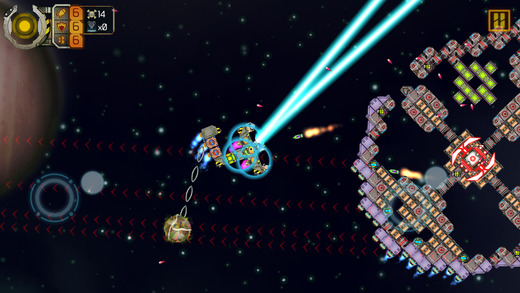 Your days as a disillusioned galactic waste collector are numbered. Everyone laughed, but now you have all of the parts you need to build the ultimate carnage machine, perfect for the amount of anarchy you intend to raise. Starborn Anarkist is a twin-stick shoot-em-up styled after old arcade classics. Blow up everything in sight and salvage parts to put together deadly new ships with the help of Touch Tap Play’s Starborn Anarkist cheats, tips and tricks strategy guide.

Aside from scavenging parts from destroyed ships, the other method of unlocking is to complete specific achievements. You will probably do a lot of these naturally as you play, but if you ever want to know the kind of parts you can get, take a look through the list of achievements and see which parts are listed. See anything you like? Start working towards that achievement! The most important parts to work towards to are layouts, which control how much space you’re allotted when you’re building a ship.

This game also follows the upgrade rules from old arcader shoot em ups. However, it’s important to note that there are two settings to how you can control your upgrades. On the main menu, if you tap Settings, then Game, you can change the upgrade system between Uniform (EASY) and Individual (HARD). You see, when you destroy enemy ships, they’ll drop upgrades that have a color attached to them. There’s a gun upgrade, engine upgrade, and shield upgrade. Each of these can be either red, blue, green. Still with me so far? Each color will do something differently for each individual part, but you can only have one color on a part at a time. When you’re set to Uniform, you only have to worry about collecting upgrades of the same color, as all three attributes will upgrade when you get the same color. For example, if you get a green gun upgrade, your engine and shield parts will upgrade up the green path as well, up to a maximum of level 10. Be warned that if you pick up another color, your parts will drop back down to level 1. If you’re set to Individual, you’re allowed to upgrade your three categories separate from each other. For example, if you pick up a green gun upgrade, only the gun part will be upgraded and your other parts will remain unchanged, so you’re allowed more customization. For beginner players I recommend leaving the system on Uniform just to get a feel for the upgrades and controls, and later when you’re comfortable you can switch over if you so wish. I’ll list what the different colors do for the parts.

Pick your favorite upgrades and stick with them. It’s better to have a maxed out weapon that you don’t like rather than having a level 1 gun.

3. Pick up the cogs to repair your ship!

Aside from ship upgrades, enemy ships will often leave behind these yellow cogs. Make it a priority to grab these as it’s scrap, the main currency of the game. Not only are they worth a lot of scrap, but your ship is also repair if you’ve taken damage. Very useful!

4. Defend yourself against enemy weaponry appropriately!

Certain ship parts can make your life a lot easier, such as the aforementioned Anti-Missile Gun that automatically shoots down missiles once they’re in range of your ship. Another useful part is the Auto Repair module, which is unlocked by starting a mission and then not moving at all for 60 seconds! This thing is self-explanatory, but it’s really useful in a pinch when you’re on the run from a giant boss ship. The Decoy Drone Bay is really useful too as it creates extra targets for your enemies to go after, buying you precious time. Check out the rest of parts and see if anything floats your boat; if so, try unlocking it! Experiment with parts to see which ones you like the best.

In the end, your ship’s power comes directly from the parts and upgrades you get, so power that baby up and get to blasting! If you have any questions or suggestions, leave a comment below. Until next time!