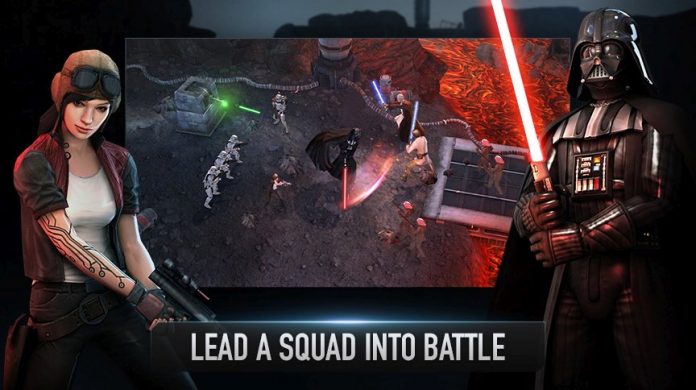 A brand new game in the Star Wars universe has been launched for iPhone and Android devices, Star Wars: Force Arena. We were lucky to get the chance of testing it before its launched and really loved it – check out our review to see what we thought about it. Or just read on for some Star Wars Force Arena cheats, tips and strategies!

The truth is that this amazing game is pretty challenging and it has a multitude of elements that new players might get confused over. We’re here to help you with those and help you learn what has to be done to progress through the game faster and unlock all characters faster, as well as win all your matches.

So let’s not waste any time and let’s check out below some Star Wars: Force Arena tips and guide for beginners mainly – but advanced players might find a trick or two they didn’t know about as well!

Complete the missions
I am listing them first because they are not easily visible. The missions are in the upper right corner, near the cogwheel that opens the game’s settings. There are two types of missions there: the Basic ones which reward you with new heroes upon completion, among other goodies, as well as the Special Missions which are time-limited, but offer amazing rewards as well. Keep an eye on them and make sure you collect the rewards as soon as you complete the mission, otherwise you won’t unlock the next one.

Don’t ignore the training mode
Normally, I would test new Heroes, cards and decks in the PvP modes. But in this case, it would be best to try them always in the training mode. You will play against an unskilled AI there and it will be easier to see the actual or potential strengths of your new Hero and troops. Going with unknown heroes and cards straight to PvP might prove frustrating and since you will face good opponents, you might actually get the wrong impression that a good hero is bad. That happened to me with Han Solo for a long time! So always test out new strategies in the training mode.

How to get more cards & heroes
Card packs are extremely important when it comes to progressing quickly through the game and fortunately, there are multiple ways to get them. First, you will get one Victory Pack for each battle that you win in the game. The longer you have to wait to unlock them, the better the cards inside. You also get a Play Pack that opens instantly after each 10 battles you take part into, as well as a Free Pack every few hours.

It’s extremely important to always be working on unlocking the Victory cards and trying to manage time as good as possible (for example, always work on longer Tier cards during the night, when you are not into the game and try to open as many shorter timed ones during the day.

If you want to purchase cards with Crystals, it’s worth noting that the rewards you get are based on your Tier so I would really suggest to wait a bit until you get to a decent Tier. “Decent” Tier is the maximum Tier you can reach before opponents start to become extremely difficult to beat. But the higher you can go, the better the rewards inside those card packs (free or bought), so it’s always worth being a bit patient!

Heroes are a bit more difficult to get and the safest bet early on is completing the missions. But if you are active throughout the game, you will get heroes as well. Remember: Heroes are important in Star Wars Force Arena, but you actually win your battles with good, high level decks! However, some heroes are better than others, so make sure you test them all out and see which fits your play style better

How to build a perfect deck
Early on, you won’t have many cards to choose from so you will have to deal with what you have. Make sure that you always upgrade your cards as soon as you have the chance early on. Ideally, you should focus on a single faction (the Empire or the Rebels) in order to make sure that you will always have enough Credits for the upgrades.

But as you start unlocking more cards, you should become a bit picky and only upgrade the cards that you like and plan to play. This is important because you can always go to the trader and trade 10 cards of a lower rarity for one card of a higher rarity level. Eventually, you will be able to trade one Legendary card for a random Legendary card, so with a bit of strategy and planning ahead, you can build a really nice deck without spending any real life money!

Also check the shop. Cards of different rarities will be available for purchase for credits and you can even get some nice Epic cards there as well! They are pretty expensive though, so always consider the benefits when spending so many credits on buying them from the shop!

Regarding the deck building itself, once you have more options to choose from, start working on perfect matches. Have in mind that unique leader units are usually extremely strong. Also, finding the right balance cost-wise is extremely important. Low cost troops are good because you can spawn them quickly and send them in high volumes over to the opponent, but going only with low cost cards might prove difficult against a skilled opponent which, with one grenade or a nicely placed support airstrike can wipe out your entire team and win the game. My recommendation is to find the perfect balance between low cost and high cost cards, and aim for an average energy cost between 3 and 3.3.

How to win all battles
Even though having high level heroes and high level cards helps a lot, the strategy that you use is extremely important. Of course, it all depends on the strategy the other player uses, but here are some pointers and tips for winning all your battles in Star Wars Force Arena:

– try to wait for the opponent to attack and play the defense. The best part about this is that you get a bonus when defending: the turret helps you with extra fire power.
– try to wait for your Energy meter to fill up so that you can launch a full attack over your opponent. Always start with the best possible cards you have in your hand
– keep your Hero alive. Don’t forget that you can use the Health refills on your opponent’s side as well!
– although it’s usually a good idea to focus on a single side in order to win, sometimes changing the lanes – usually after your Leader is destroyed – might help you turn things around as the opponent will have to regroup and most likely will have less troops to send as they already sent troops on the other lane. But make sure you do it smart because otherwise you can lose your turret!
– know your cards. All the cards in your deck have strengths and weaknesses. Make sure that you know them in order to play them at the right time, against the correct opponent. Just throwing cards onto the battlefield as soon as you unlock them won’t win you battles!
– double tap and use your Leader’s special power. Double tapping quickly moves your leader around, while their special powers can be game changers during a battle.
– keep your leader alive: the more times they die, the longer it takes for them to regenerate, so it’s a good idea to keep them alive for as long as possible!

These would be, for now, our tips and tricks for Star Wars: Force Arena. If you have other suggestions for fellow players, let us know by commenting below.