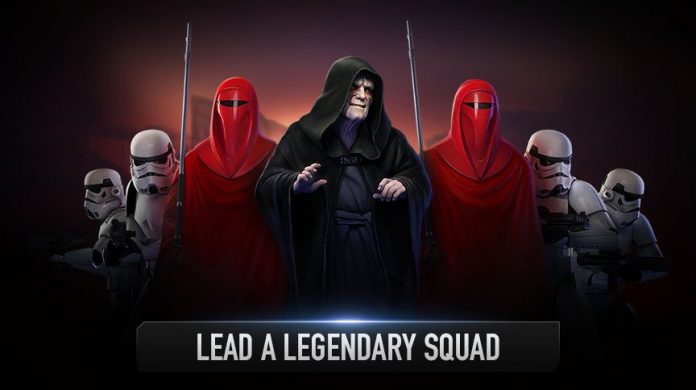 This Christmas, it seems that I was a really good boy as I received an early amazing present. Star Wars: Force Arena will be released globally soon and I had the chance to play the pre-release version and test out my might and strategy against other people from all over the world. Read on to see if the Star Wars: Force Arena really has the Force on its side!

As its name suggests, the game is mainly a MOBA type of game, but one which borrows elements from another popular title, Clash Royale. The result is not-so-surprisingly entertaining and a great addition to the genre.

Basically, you start a versus match with one Leader: a well known character from the Star Wars series. I’ve seen Luke Skywalker in action, Bobba Fett, Emperor Palpatine and much more, so there’s a nice range of choices to make. The leader has a deck attached to them and you can play cards that will usually deploy troops on the battlefield. You will always play against the opposite faction, so if you choose a leader of the Rebels, you will always fight the Empire (and vice-versa). You can also deploy support units or other helpful gadgets to aid your cause.

What is your cause? Well, crushing the enemy, of course! Each player has three defensive turrets that stand between them and victory: destroy the turrets and the enemy base and you’re guaranteed victory. You can also win a match by having the most turrets destroyed at the end of the round, so planning your moves a bit in advance does help. 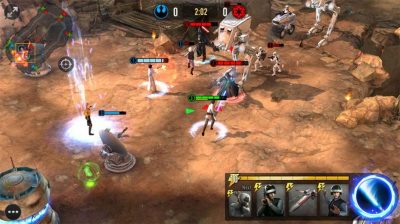 Similar to Clash Royale, the game has deck building elements. There are multiple ways to collect cards when playing the game, the main one being from unlocking card packs you win after a successful battle. You can win new cards for your deck or existing cards that can be used to level up and upgrade your troops. Therefore, there is a bit of randomness involved as you might get better cards for the faction you don’t want to play as. Not a biggie though, since both factions are really fun to play!

The game seems very balanced already: I have played both factions with different deck setups and I was very satisfied with the results: you can always win if you have a good strategy and a good deck, no matter who you’re playing as! At the moment, it does seem that the player who attacks first has a slight disadvantage since the defender will have the turrets on their side, but there are different strategies that will work. 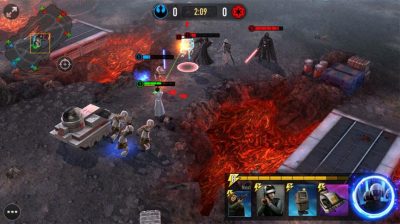 Being a free game, Star Wars: Force Arena does have a bunch of purchase options available, but for the most part you will not feel forced to spend your real money on the game. Of course, it will help tremendously when it comes to building decks and progressing faster in a shorter amount of time, but if you’re patient you can really enjoy the game without spending anything or at least without spending too much.

A game mode that I really liked is one you unlock once you reach level 3 in the game: 2 vs 2 matches. This brings up the excitement to whole new levels and, even though it doesn’t seem as popular as the 1 vs 1 option (you have to wait longer to get matches), it’s really fun. Plus, it never hurts to have more gameplay options at any time.

All in all, Star Wars: Force Arena is a beautiful game with great gameplay and balanced factions. It can provide entertainment for hours… even days and I am sure even those who are not fans of the Star Wars franchise will love it. So try it! The Force is strong with this one!