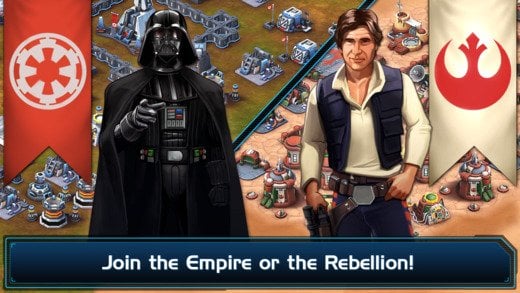 Star Wars: Commander has just been launched, the Clash of Clans set in the Star Wars universe. It’s pretty fun to play the game, actually and even though most of the mechanics are similar to the aforementioned strategy hit, I still want to give you a helping hand with some Star Wars: Commander cheats and tips that will help you build the best base around and rule the galaxy.

So read on our Star Wars: Commander ultimate strategy guide for some great tips and tricks to get the most out of this game!

1. Build up resource buildings first
The Credit Market and Alloy Refinery are the first things you should build on your base and level them up quickly, followed by the Credit Vault and Alloy Depot.

You need a ton of resources throughout the game, but especially early on, you want to get an advantage.

Nobody will attack you for three days (or until you attack another human player), so don’t worry about defenses and focus on the resources to build up your base as much as possible.

2. Get more Crystals
You can clear up the debris on your base to get some free Crystals and you should also focus on completing the missions in order to get some extra Crystals. Connect your game on Facebook and use any opportunity you have to get free Crystals in Star Wars: Commander, then buy the third Droid to help you build up your base faster.

This is the only real thing that you must spend your Crystals early on, not on rushing production!

3. Focus on the missions first
The missions are made in such a way that they are easy to beat for beginner players, while offering you some nice rewards as well. So focus on completing the missions and mastering them to increase your resource counts and get some free Crystals.

When you hit the point where you can no longer get three stars in the single player missions, that might be the time to start attacking other players.

4. How to properly attack other players
Early on, you only need a bunch of troops to make things count. Upgrade your barracks to level 2 and build some Wookie Warriors to take down turrets, then send Rebel Soldiers to gather resources.

Focus on attacking players with a lot of resources and poor defenses: you want it to be easy for you to target the Resource Silos, because it’s resources you’re after early on and not Medals.

The more Medals you get, the tougher your opponents will be, so it’s a good idea to keep the Medal count low in order to get players that are easy to beat.

There are two strategies for advanced players as well as beginners in Star Wars: Commander when it comes to attacking: resource stealing (similar to what I have explained below) when you lower your Medal counts, or Medal attacks where you don’t care too much about the resources, but winning the battle and getting the Medal rewards instead.

If it’s the latter you’re after, find the bases that reward you with the most medals and attack them. Just make sure that you win!

5. How to defend your base
When you start caring about the defense of your base, you should start up with building some new Turrets. Build all that you can and learn the troops they are good against and use them to their maximum potential.

For example, Proton Mortars should be placed somewhere in the middle of the base to have access to all surrounding areas, while Rapid Fire Turrets should be placed in a circular pattern to cover all the corners and leave to piece of base unprotected.

A good strategy is to keep the turrets, Headquarters and Resource Silos behind as many layers of walls as possible, and keep the other structures outside to be used as bait for incoming forces.

When it comes to building the base and hiding your buildings behind the walls, it would be perfect if you could build as many rooms as possible, so that your enemy has to breach multiple layers of walls in order to get to your buildings.

If you want to lose Medals and maybe save some resources, simply take your Headquarters out of the protection zone and place it in an area that’s not defended. Hopefully other players will attack it, ignoring the resources and you’ll enter protection after losing the battle.

6. Who should you choose: The Empire or The Rebels?
This does not really influence the game as the troops that you can build after joining any party are similar in stats, just their design matters.

Make your choice based on your preference, but it appears right now that the Empire is more popular and has most followers.

7. Cheat to choose both the Empire and the Rebels
First of all, if you have multiple iOS devices, it’s really easy to select both: simply start a game on each device and on one, choose the Empire and on the other – the Rebels.

Now you can switch from one to another and play as both factions. If you want to just change the faction (but restart the game), you can uninstall your game and install it again.

8. Join a squad
Joining a squad as early as possible is essential for your well being. Not only that you get a group of players to play with, but they can also help you by sending out troops which can be used in battle. Don’t forget to also donate troops to your fellow squad mates, so everything is fair!

9. Be patient
Star Wars: Commander is a game that requires a lot of time, just like Clash of Clans, if you want to be really successful. Build a solid base by constantly upgrading your buildings and walls and by training and upgrading your troops and heroes.

Attack players that have lower stats than yours and focus on getting as many resources as possible – then use them all not to risk losing them.

If you manage to do all this and combine it with a solid squad, then you will surely become one of the best players in the galaxy.

Are there any other tips and tricks that you would like to share with fellow Star Wars: Commander players? Let us know by commenting below!