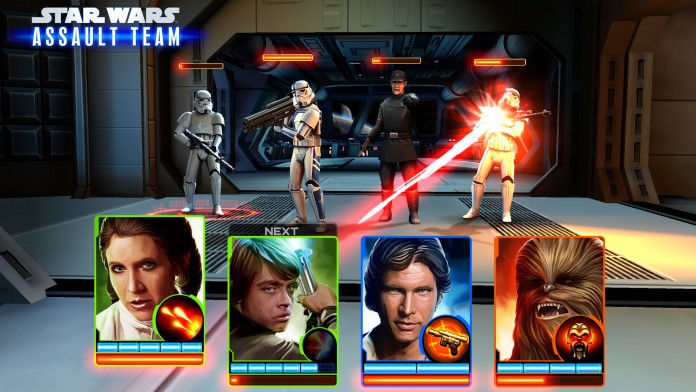 Following the free to play game Star Wars: Tiny Death Star, Disney has unveiled another Star Wars game which should be released globally sometime this Spring.

Unlike Tiny Death Star, this new Star Wars game is going to feature a way more serious tone and gameplay experience. Star Wars: Assault Team is going to be an interesting mix between card battle and strategy game, featuring many fan favorite characters like Luke Skywalker, Han Solo, Chewbecca and others.

The game features a turn based combat system which is played with the use of cards. For this reason it’s not going to be different from the many card battler games available on the App Store. Before being able to play, gamers will have to form a team by collecting and choosing different characters. From there, players will have to deal with countless dangers and enemies while traveling between famous locations of the Star Wars franchise.

For those who prefer playing against other human players, Star Wars: Assault Team is going to feature a multiplayer mode. Details are still scarce on how this mode is going to work.

Star Wars: Assault Team is going to be released on iOS sometime this Spring. We’ll keep you updated as soon as more news and gameplay details come in for the game.