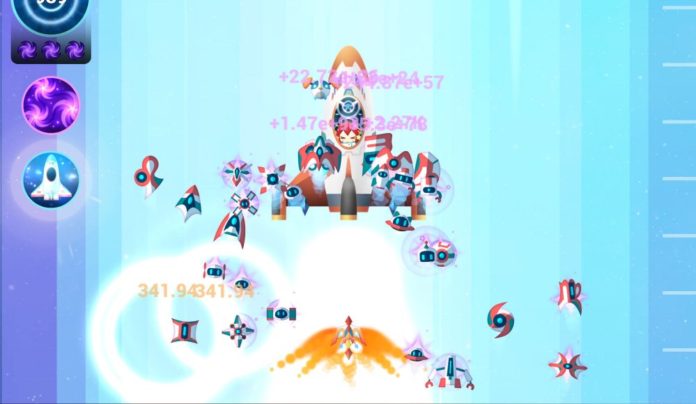 It rarely happens for idle or clicker games to come with stories as nice as the one delivered by Star Tap. The game’s story really makes you care about your character, wondering about the Alien and always keeping you curious about the next destination and what might happen there.

But since space travel is not an easy thing to do, I’m here to lend a helping hand and share with you some Star Tap cheats and tips that will help you reach new planets faster and have for fun while playing the game. So let’s not waste any time and let’s check out some Star Tap tips and tricks below!

Your taps matter all the way to the end
The increase in speed that you get through tapping (your ship’s regular ship) stays until you reach the destination. This is why it makes sense to tap as much as possible early on in order to gain some decent speed and reduce the time required to reaching the next planet.

Even more, the Slipstream bonus and the clicks recorded to its progress never reset: so no matter what happens, you are always one step closer to getting that massive bonus and boost in distance covered. Therefore, the more you tap, the better it is for your game!

Ship upgrades: the main one increases your speed boost per tap. Reaching certain milestones unlocks special skills (like automated taps, fast-forwarding time and more) which can be later upgraded as well. Investing in the tapping skill is a really good idea, so keep it maximized!

Drone upgrades: there are all sorts of drones and upgrading them is extremely interesting. Not only that you get more resources per minute from upgrading your drones, but you also unlock special extra benefits when reaching certain milestones (usually at 10, 25, 50, 100, 200 and so on). Each drone offers slightly different benefits, so make sure to check them all out – but in the end, you’ll most likely end up unlocking them all anyway.

Also, with each new drone type that you unlock, you can choose an affinity bonus. There are three major affinities in Star Tap, each with its own goodies:

It’s difficult to say what the best strategy is when it comes to the affinities in the game, but I always focused my points on Thruster and Resources and things went really good.

Advancements & Redetermine
There are two other major things to consider in the game. The Redetermine option becomes available when you unlock level 600 of your ship and is basically a reset of the game. You start over, but you will get an extra advantage thanks to the special materials you will collect.

The advancements are purchased using these materials and can be leveled up. A good idea is to focus on getting a bunch of them first and upgrade later – to make sure that you are investing your otherwise hard to get materials in the best possible ones.

Reaching new destinations
Whenever you reach a new planet, you get a bunch of goodies, but also the chance to choose one of the three possible boosts during the new trip. My recommendation is to always go for the resource boost since that is permanent. Resources are required to upgrade your main things in the game, so you need as many of those as possible.

Watch ads to double income
Being away from the game doesn’t mean that your drones are not working anymore! They will still collect resources for you and you have the option to watch a video ad when you return in order to double the amount collected. It’s a great idea to do so after taking longer breaks from the game (for example, over the night).

This is everything we have for you in terms of Star Tap tips and tricks. If you have extra suggestions for fellow players, let us know by leaving a comment below.