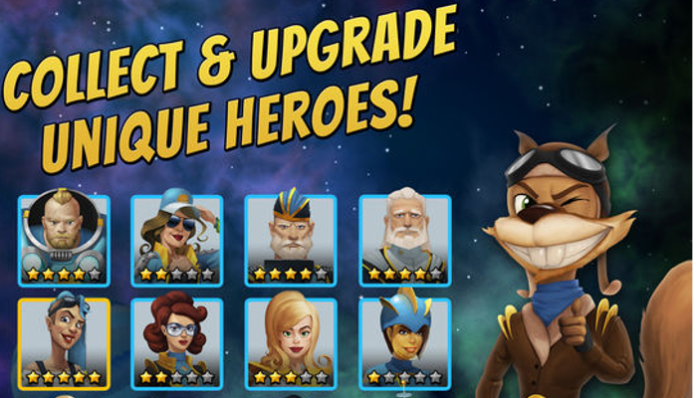 Star Squad Heroes puts you at the helm of an intergalactic war fighter. Recruit space explorers from all around the universe to build the ultimate crew, then free the galaxy from the Titan Empire! Our Star Squad Heroes cheats and tips will shed some light on how to get the most out of your weapon systems.

Star Squad Heroes is a fun and frantic space combat game, and we enjoyed it a lot. There’s lots to do in galactic adventure, so let’s get started with our Star Squad Heroes cheats, tips and tricks strategy guide!

You can fire your weapons once they’re charged up to at least 100%, but did you know you can “overcharge” them? Refrain from firing and your weapons will continue to charge past 100%. Weapons will charge all the way up to 200% at which point they will deal extreme damage! This is a useful technique to keep in mind for certain situations. Going up against an enemy ship with recharging shields? Try using overcharged shots to hit them hard!

Choosing where to position your weapon systems on your ship is just as important as deciding which weapons to bring in the first place. Carefully consider where you’ll put your weapon systems, because it can be the deciding factor between a victory and a loss. Having your weapon systems far apart and not clumped up together will make them less susceptible to area attacks, like rockets.

However, having them too far apart can leave your ship vulnerable, depending on how many crewmen you have. If you don’t have enough to accommodate all of your weapon systems at a time, crewmen will need to run to the next open weapon system in the event their current one is destroyed. The further the systems are apart, the longer it’ll take for your weapons to come online! But remember – this is only a problem if you don’t have enough crewmen.

Zoom in for accuracy!

You can zoom the camera in during battles by pinching the screen like you normally would. The game doesn’t let you know about this right away, and we wondering why some of our shots would miss. This is especially important for single-target weapons, like your starting Laser Blasters. Zoom in until your target becomes huge, then tap away! Don’t rely on the zoomed out tapping – it’ll make your shots miss often.

In addition to the rockets and lasers you get at the beginning of the game, you’ll unlock additional weapon systems for purchase. You’ll notice that there are several types of damage, and each system dishes out different types. There are:

Each weapon type has its own unique characteristics. It’s important to know how they interact with each other! For example, the Shield Generator system can protect you from energy type damage, which include lasers and plasmas. However, it won’t protect you from physical damage from rockets. A special note-worthy weapon is the EMP Detonator. EMPs do little damage to your systems but they disable them for a short period. With the right timing EMPs can be incredibly deadly, so be careful if you’re opponent is using them.

Changing your weapons around will soon become an important factor into the battles ahead. If you lose to an enemy ship, try to change your system around accordingly. Did they have a lot of laser blasters? Try bringing shield generators! Do they have a lot of systems bunched up together? Try blowing them all up with rocket barrages!

Power up your crewmen!

Keep in mind that you can fuse extra unwanted crewmen with your active ones to level them up faster. When crewmen level up they unlock skills that add bonuses to the weapon systems they’re in charge of. Try to fuse crewmen of similar weapon types to gain bonus experience, or use Luna as she’ll add extra experience to anyone she’s fused with.

That’s all for Star Squad Heroes! If you’ve got any other tips or tricks to share, let us know in the comments below!