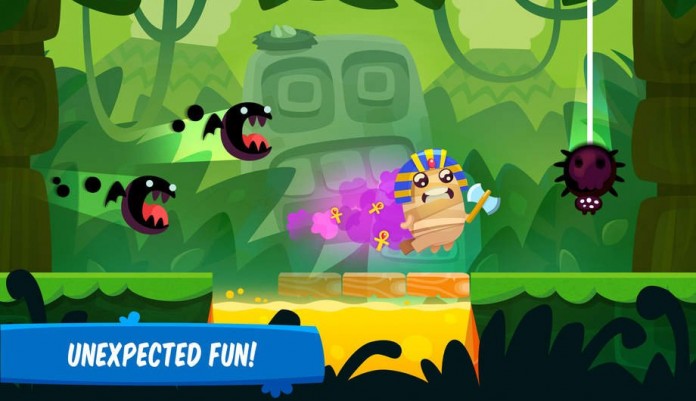 Spooky Trap is an interesting one tap game crated by the same people behind Buddyman: Kick Free, and a great game to fill up your free time and turn into your newest obsession. Even though in theory it is extremely simple, you will see that making even to the 10th stage in the game is a real challenge – but we’re here to help you as much as possible by sharing some Spooky Traps cheats: tips and strategies to get as far as possible and also unlock all characters in the game.

This is indeed one of those frustrating, “one more try” type of games, but we love them a lot and we’ve been playing for hours. We have the feeling that you’ll do the same, so let’s get this started to improve your game. Here are our Spooky Traps tips and tricks!

1. Be prepared for each challenge
The game randomly throws at you different challenges (levels) that you have to go through and some are easier that others – with most of them proving to be quite difficult. Probably the easiest is the one where you have to tap to walk over the bridge, but any challenge can prove tricky. The most difficult in my opinion are those where you have to jump over moving obstacles/enemies, but in the end you should be prepared for anything. Be quick at finding what type of challenge is thrown at you and then know what you have to do. Any fraction of a second that you lose could mean game over.

2. Time your taps flawlessly
Even though all you have to do to control your character is to tap the screen, timing is vital: if you do it too soon or too late, your character will die. So learn how each of the stages works and tap accordingly. Also have in mind that you don’t always have to follow the routes – I am talking here especially about the portals which should not be entered just because they are there. Make sure that your route is blocked before deciding to enter a portal – otherwise, you’ll send your character straight into an obstacle!

3. Characters don’t have extra strengths
Unfortunately, all the 40 characters that you can unlock in the game play the same, it’s only their look that’s different. You will still want to unlock them all, most likely, but have in mind that there is actually no real difference when it comes to playing as any of those characters.

4. Watch ads only when needed.
There are two options for you to watch ads: first when your character dies, if you want to continue. Unless you’re about to break your record, it makes no sense to watch an ad to keep going. The second option to watch an ad is to get a free character of some extra money. Keep an eye on the counter showing you what your reward would be and make sure to always watch an ad when you would receive a free character or anything over 200 coins. Why not watch ads continuously? Because they might run out and you might, this way, miss an opportunity to score some free characters.

5. How to unlock all characters in Spooky Trap
Obviously, the long way would be to keep playing, get better at it, log in regularly for the free reward and watch all the ads that you can do. But there’s also another way to do it and it’s named the time lapse cheat. As you probably know, every now and then you get a free gift, which is exactly 500 coins, the amount required to unlock a new character. All you have to do is to go to your device’s settings and set the time forward by a couple of hours, get back to claim your reward and keep on doing so. This might be fixed in the future or might not work at all. However, you can try it if you want to, although it does take most of the fun from the game!

These would be our Spooky Traps tips for now. If you have others to share, let us know by commenting below!