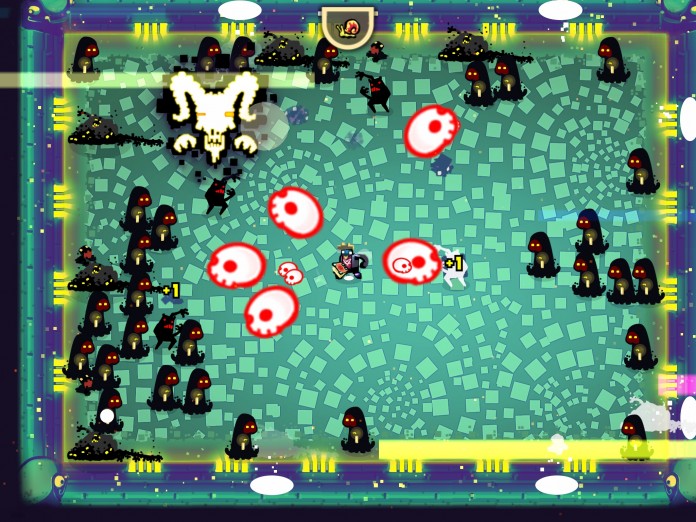 Arcade shooters have always had a place in the heart of players who have been gaming for a very long time. There’s something in playing a hectic gameplay experience just to get a high score that those who have started playing video games only recently will hardly understand. Spooklands is a game that will let older gamers relive these feelings as well as letting younger gamers understand what makes an arcade shooter game so engaging with a well crafted and challenging gameplay experience.

Spooklands is played from a top down perspecive, with players controlling their characters with very simple controls. Tapping on the screen will make your character shoot, while holding the screen down for longer will unleash a secondary weapon which is more powerful than the main one. What makes Spooklands’ controls so unique is that there are no real movement controls, as your character can only be moved with the weapons’ recoil. This means that you will often see your character bouncing from one side of the arenas as you try to get rid of waves upon waves of bad guys and try to reach power ups.

Due to the unique controls, Spooklands can be a frustrating experience, as it’s pretty easy to get surrounded by enemies and lose all hearts. With just three hits your character will die and it’s not unusual to lose all of the three hearts at your disposal in just a few seconds. After losing one heart, your character will be invincible for a little while but that’s useless when surrounding by enemies. This adds a risk and rewarding mechanic as well, since most of the times you will be forced to choose between a safe shot or a more risky one to reach a power up that could make your life easier… if you manage to reach it in one piece.

Despite a simple gameplay experience, Spooklands is actually quite varied. The game includes three different arenas which feature different characters and enemies. The first arena features an axe-throwing caveman and prehistoric enemies, the second a kid launching shoes at spiders and the third a wizard launching skulls at undead enemies. While the characters aren’t all that different from one another, they add some welcome variety.

Just like the gameplay experience, Spooklands’ graphics are really well done. The game uses a retro style with nicely detailed sprites and pixels flying all over during the more hectic moments. The game is a clear throwback at older arcade games and the graphics manage to enhance the game’s old school feeling and atmosphere.