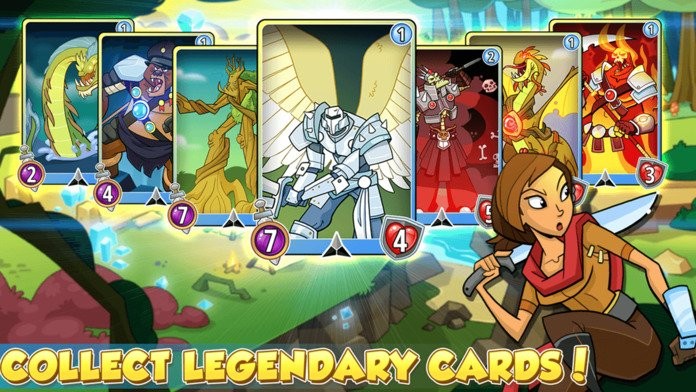 Kongregate have just launched their own collectible card game on the App Store under the name of Spellstone and I must say that I really love it. I barely managed to put the game away to come and write this article – it’s that good! But it’s also complex and extremely difficult, so let’s talk some strategy and let’s find out how to beat that perfect, unbeatable deck. For that, we have Touch, Tap, Play’s Spellstone cheats and tips, a complete strategy guide that will help beginner players especially, but hopefully the most advanced ones out there as well.

So if you want to keep winning battles and build a perfect deck, our Spellstone tips and cheats will hopefully help you get there – so let’s not waste a single second and let’s get this started!

1. Fast cards rule!
Even though they generally cause less damage than slow cards (those that require more turns to activate), fast cards are extremely useful because they start dealing damage as soon as they are played. On numerous occasions, a smartly played smart card can easily take out a strong slow card before it activates.

2. Use high health cards as tanks
Usually, the first card you play should be a very high health card and it doesn’t really matter how much it activates (the faster, the better though). If you manage to keep your first card alive for as long as possible, with some good cards played next, you will get more cards in play than the enemy and easily take them out. Find the right balance between playing the fast cards and slower, high damage, high health ones for the win.

3. Slow cards can pack a punch!
Even though I’ve been praising the fast cards so far, I know that it’s usually the slow cards that pack the real punch and make a difference. Always look at what the enemy has on the table and play cards accordingly.

A good strategy, in my opinion, is to play a fast and high health card (maybe a fused one) then a good 1-2 turns card. Next, play your cards based on what the opponent is throwing at you. If they start rushing in fast cards, you have to keep up and do the same or play very high health cards that get the chance to activate even though they’re under attack from the fast cards. If they play high damage, scary slow cards, play faster cards and you will probably take them out before they get a chance to cause any damage. Finally, always bring to play the cards with special skills, especially those that cause damage to random enemies, curse them and increase your cards’ attack.

4. Use your dust wisely!
Using dust to improve your cards is vital for your long term success, but you shouldn’t do it until you lose your first single player mission. Until that happens, you will most likely have a pretty decent deck and you will know which cards are better than others. The prices are always the same for upgrading the cards, so it would normally make sense to start with the rarest cards. But that’s not always a rule – make sure you know what your cards are doing, how the upgrades affect them and upgrade based on your needs. I would suggest to go for the fastest cards first, since they will get even more health and last longer in battle, allowing your slower cards you’ll play later on to activate and cause damage.

Also, don’t forget to use the dust to upgrade your hero too! The price is similar to upgrading cards, but I would personally suggest to do the cards first and only if you have an excess of dust move on to the hero.

5. Fuse cards after you get a full deck
Fusing cards is even more fun as the cards get a lot better and with more interesting stats and special powers. You need two maxed out cards of the same type to be able to fuse them, but have in mind that early on you won’t have a ton of cards to play so fusing might not be the best idea: you want 15 cards in your deck to make sure that you won’t get outnumbered by the enemy deck. But once you have replacements to bring in (usually after completing the third campaign), then you can start fusing your cards to enjoy the even better stats and destruction they cause.

6. Replay older stages on higher difficulty
If you’re starting to hit the wall in the single player campaign and you don’t have money for new cards or dust for upgrading the ones you already have, you should replay the older stages you have already completed: the level of difficulty increases in the case, but usually if you’re at least 2-3 campaigns ahead, you should have no trouble beating the extra difficulty level and enjoy the better rewards.

7. Constantly buy new cards for your deck: as soon as you have the 100 gold required for that, go to the store and get the basic pack. There’s really nothing you can spend the coins on, so make sure that you take advantage as soon as possible: new cards will give you at least some extra dust for upgrading and you can’t remain competitive without them.

In order to get more gold in Spellstone, you should first join a guild – as soon as you have the chance because a guild increases the amount of gold you receive by up to 50%. Next, check out the quests and make sure to complete them: that’s where some amazing rewards are waiting for you. Finally, play the Bounties in order to get even more gold and rank up, with the potential to do well in events that will give you even more rewards.

All in all, Spellstone is a game that requires you to be active and if you are – you will do just fine. Cards will get better, you will get better and you will manage to build up your strategy to defeat all the opponents you’ll face. The game is not as complex as Hearthstone, for example, but it is a solid card collecting game and we had a great time playing it. If you have other tips to share with fellow players, let us know by commenting below!