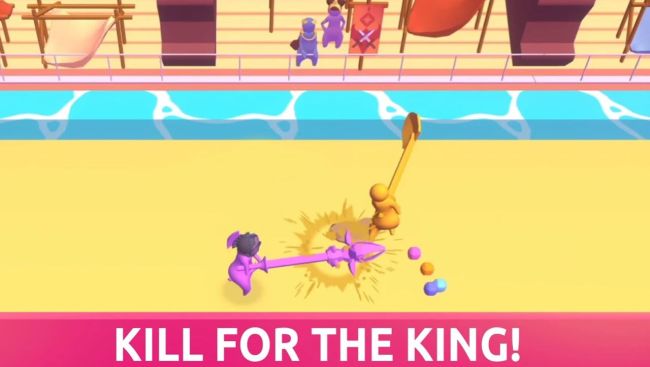 Today we are going to share all the Spear.io 3D tips and cheats that we have gathered so far and tell you everything that you need to know in order to win more encounters and possibly become the best player out there!

Just like many other .io games out there, Spear.io is meant to be played between players from all over the world! So it should come at no surprise that there are some all-time aces who are going to spear you to death as soon as you get in game!

But putting that aside, if you want to improve at the game and learn everything there is to know, you came to the right place! So let’s not waste another second and dive right into the Spear.io 3D tips and tricks right here below and teach you how to beat everyone!

Your biggest weapon in this game, even bigger than that spear you carry around, will be your moves. No matter how your spear is, the moves are what will win you rounds, so you should start practicing how to better move and avoid others, aim at others and collect the loot.

The very first thing you should do is learn how to properly move your character around. To move all that you need to do is tap, hold and drag your finger across the screen into the direction you want to move.

Also there are a few things you need to know when moving, so let me detail on them a little bit for you:

Don’t move in a straight line

If you are moving in a straight line, you will have a very hard time hitting people and even more so surviving for a long time. By moving straight you will leave your back uncovered which will basically make you an easy target for the rest.

This should be your number one tactic to move around. Try to make S-shaped moves when running around looking for targets because that will make it more difficult for the enemy players to hit you.

When you move in a S shape you will also increase your chance to dodge enemy spears and when they try to hit you, it will be easier to change direction because you are already used to the motion (as opposed to when you move in a straight line and then try to suddenly dodge).

Run around in circles when you’re being chased

If you notice a player on your tail, the safest way to avoid them is by circling them. They will most probably try to do the same for you, so it will end up like a never ending spiral or a dog chasing its tail.

I suggest that you do this when you notice an enemy approaching, because even if they are not after you specifically, you can still try to take them down if they end up having their back at you for even a split of a second.

Go for the weaker players first

The weaker players should be your priority targets, because they are easier to reach (if you upgraded your character a little bit by making a couple of kills) especially if your spear is longer than theirs.

Another reason why you should go for the weaker players first is that maybe they are new to the game, and they don’t yet know how it works, so that makes them easy kills. If you are really determined to get stronger, then make sure you do this because it’s a really easy way to level up.

Pick up the items from the ground

You probably already noticed that there are a couple of items scattered around the ground. These are always good to pick up, because they will either speed you up, or boost you to get bigger and stronger.

The speed boosts are the yellow boosts, which give you a temporary buff to your movement speed, which will allow you to slide much more easier between players. They are a very useful buff to have because usually the faster your moves are, the harder it is for the opponents to dodge your spear.

Another big reason why you should take them is so that you can avoid the better players easier. It will never be super easy, because if they have speed ups too (which they most probably do) then you will have to try and outsmart them. But either way, just try to pick these boosts up because they will be good for you.

These small beads are good for collecting, but they will not do a ton of boosting for you, so if you want to really make upgrades, then you should go for the other players instead. I don’t suggest going specifically for the beads, but if you want to collect something then go for the speed boosts.

Revive for free once

While playing you will be able to revive once for free by watching an advertisement. I really suggest that you do this if you are far ahead of the others, because it will place you where you left off with the exact same points.

Since you can only revive for free once per round, I suggest that you only do it if you are ahead, because otherwise it is not worth it. You should also do it if you are close to leveling up, because the moment you die, you lose all progress towards next level! So if you’re faar ahead, it might not be worth losing it all.

These would be all of our Spear.io 3D tips and tricks that we have for you right now! Do you know some more useful game tips and strategies to take on the other players? Feel free to share them with us and the other players down in the comments section below!