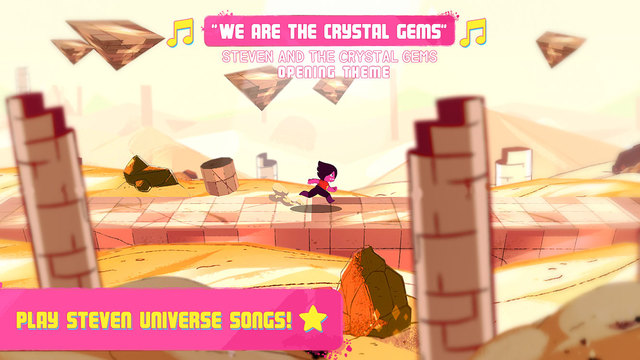 Battle to the beat in Soundtrack Attack! Soundtrack Attack is a rhythm platforming game set in the Steven Universe cartoon show. We are big fans of the show here at Touch Tap Play, so it was only natural we were all over this game when it came out! If you are a fan too, you will recognize iconic songs to run through the world to. You even play as your own created gem too! If you have not heard of Steven Universe, you will still be able to enjoy this awesome rhythm game. Get into the beat and get all the stars with our Soundtrack Attack cheats, tips and tricks strategy guide!

1. Plug in some headphones!

Soundtrack Attack is, if you could not guess from the name alone, a rhythm platforming game! That means that you will need to pay close attention to the background music to time your jumps and beats well. For this reason we highly recommend grabbing your favorite pair of headphones and playing the game like it was meant to be played! Not only will you be able to follow the beat easier, you will be able to jam out to the game’s awesome soundtrack!

2. Pay attention to the beats!

While it is fun to watch your gem run through a beautiful island, make sure that you keep your eyes on the sides of the screen. Here you can see the beats coming down, so you do not want to miss them when they show up. Try not to rely too much on watching your gem actually move through the world to time your beats. Instead, listen to the music and get into the groove of things!

You are awarded stars at the end of a level depending on your rhythm meter when you finish. Remember! Once you get to maximum rhythm and get three stars, you still need to maintain a perfect meter until you get to the end of the level for you to actually get the stars! If you mess up and miss some beats, your rhythm meter will go down a bit. Stay with the music and keep it up until the very end!

You know the crystal coins you collect during the levels? The ones inside the yellow bubbles? You can spend these on new clothes and accessories for your gem in the shop! Even better – if you get a lot of them in a level, you can actually double the amount by watching a short advertisement at the end of the level. If you got a big batch, it might be worth it to spend a couple seconds watching an advertisement. More clothes for you!

If you are having trouble on specific levels, try buying and using some of the power ups. Slow motion is pretty explanatory: when activated, time slows down to a crawl letting you nail the beats down perfectly with relative ease. Shield prevents your rhythm meter from dropping if you miss a beat when it is active. You will have to buy these power ups with crystal coins, so just a heads up!

That’s all for Soundtrack Attack. Got any other tips or tricks to share? Leave a comment below!