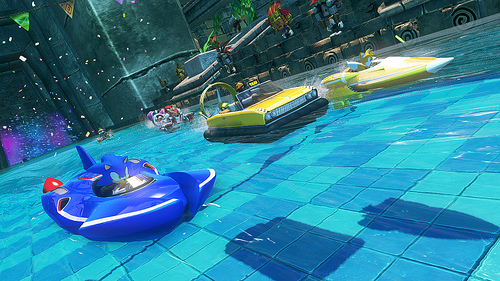 Following the recent release of the updated version of Sonic The Hedgehog 2, SEGA has released yet another Sonic title on the App Store. Even though it’s quite a different game than the classic platform games the Blue Hedgehog has been featured in, it’s still quite a good game and one of the best racing games released in recent times.

We’re talking about Sonic And All Stars Racing Transformed, previously only available on consoles. The game is a mascot based racing game in which players race against each others using characters taken from different SEGA franchises. What makes the game unique is the transformation mechanics, which make vehicles alternate between car, boat and plane modes. The boat sequences feature true boating physics, with the vehicles behavior influenced by waves and turbulence.

The World Tour mode of the game makes the whole experience a lot more engaging than expected, thanks to many different challenges that will require players to have mastered many different gameplay aspects like drifting, maneuvering through traffic and more.

Sonic And All Stars Racing Transformed is now available in the App Store for both iPhone and iPad. The game can be purchased for $4.99. The iOS version includes a new World Tour mode optimized for mobile devices, multiple control schemes, daily and weekly challenges and more.

Now that the game is out on iOS, there’s really no excuse to not play it. It’s an excellent game and you will not be disappointed.