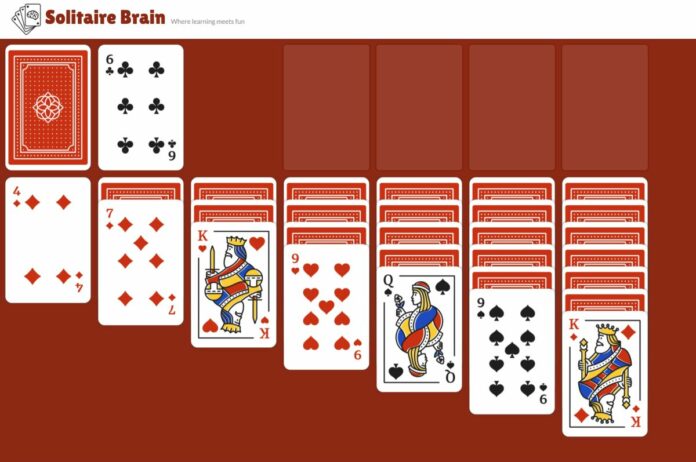 There are more than 500 different variants of solitaire, including all sorts of weird and wonderful games like FreeCell, Spider Solitaire, Pyramid, and so on.

But really, for most of us, there’s only one solitaire variant. Who needs all the others when we’ve got Klondike, the impossibly addictive and accessible card game that’s been included on every copy of Microsoft Windows since time began.

Klondike is the version that entrepreneurial developers Darshan Somashekar and Neal Taparia have chosen to focus on in Solitaire Brain, their latest free online solitaire game with an educational twist.

We’ll get onto the educational stuff shortly. First, a quick Klondike refresher.

The aim in Klondike is to sort a shuffled deck of 52 playing cards into numbered suits. You start by dealing them into seven columns, the first consisting of a single card face up, the second consisting of two, with the top one face up, and so on.

Then you have to move each card onto another card that’s greater in value by one and a different color. For instance, you can place a 7 of Diamonds onto an 8 of Clubs, and a Jack of Spades onto a Queen of Hearts.

Once you’ve exposed an Ace you can place it at the top of the screen, then place the 2 of the same suit on top of it, and then the 3, and so on until you’ve got four perfect piles with Kings on top. Chances are, however, that you’ll run out of moves first.

Klondike needs no embellishment, but Somashekar and Taparia have embellished it anyway with five custom decks on top of the default design, all of them geared towards helping you to learn as you play.

These commemorate the Heroes of Civil Rights, Heroes of Space & Flight, The Women’s Suffrage Movement, Women’s Hall of Fame, and Famous Inventors, and they’ve been compiled with the help of institutions such as NASA, MIT, and Encyclopedia Britannica.

Solitaire Brain is coming to Android and iOS soon. In the meantime, you can play online for free.